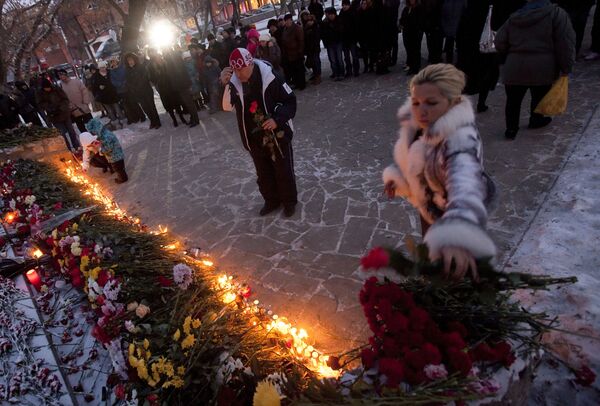 The death toll from Saturday's nightclub fire in a Russian Urals city has risen to 134, the Perm administration said on Thursday.

The death toll from Saturday's nightclub fire in a Russian Urals city has risen to 134, the Perm administration said on Thursday.

Six more people died in hospitals in Perm, Moscow and St. Petersburg on Thursday from extensive burns and toxic poisoning of internal organs, doctors in the hospitals said.

The death toll could climb further, as regional emergencies officials said 100 victims of the Lame Horse nightclub fire are still in hospital, with more than 30 of them in a critical condition.

The fire engulfed the nightclub in the west Urals city in the early hours of Saturday after an indoor fireworks display caused sparks to hit the suspended ceiling. The club is known to have repeatedly violated fire safety rules before the incident.

The government of the Perm region and Perm city Mayor Arkady Kats resigned on Wednesday over the tragedy. Emergencies Minister Sergei Shoigu sacked a chief fire inspector and six other officials in the region on Tuesday.

Charges were brought on Monday against the Lame Horse executive director, acting art director and a co-owner of the club, as well as director of the Pirotsvet fireworks supplier.

Checks are being conducted at nightclubs and other leisure and entertainment facilities across the country in the wake of the tragedy and on the eve of the New Year festivities, which are traditionally accompanied in Russia by firework displays.