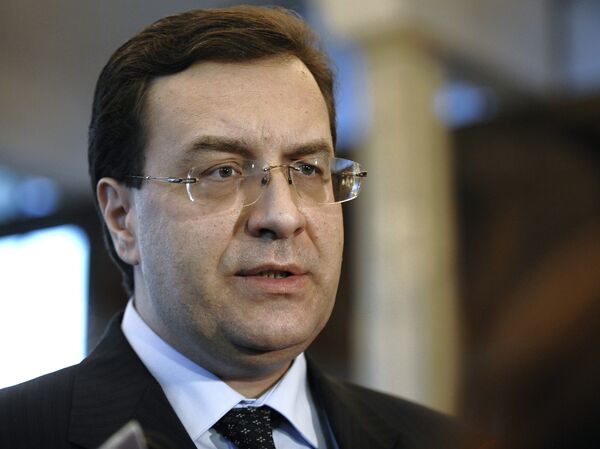 © RIA Novosti . Ruslan Shalapuda
/
Go to the photo bank
Subscribe
The Moldovan parliament failed for the third time this year to elect a president after the Communists walked out of the vote on Monday, leaving the sole candidate short of the necessary votes.

The Moldovan parliament failed for the third time this year to elect a president after the Communists walked out of the vote on Monday, leaving the sole candidate short of the necessary votes.

In line with the country's constitution, the president is elected by parliament, with 61 votes in the 101-seat chamber required. The Communists hold 48 seats in parliament while the governing coalition of four liberal democratic parties has 53.

Marian Lupu, leader of the Democratic Party, was the sole candidate. The former Communist left the party after it failed to nominate him for president in the summer.

The Communists earlier said they would not take part in a "political farce."

A source from the Moldovan Communist Party earlier told RIA Novosti the decision to walk out was not taken unanimously and suggested some Communist lawmakers would stay in the Parliament and take part in the vote. However, all members of the party walked out.

Lupu suggested on Monday that the country could hold a referendum on constitutional changes that would allow the Moldovan public to directly elect the president.

"I believe that a way out of the political collapse in the country could be brought about by a referendum on constitutional changes," he told RIA Novosti.

The political situation in Moldova remains strained almost nine months after parliamentary elections won by the Communist Party set off mass disturbances in Moldova's capital, Chisinau. Protesters, claiming that the election was flawed, attacked the parliament and presidential administration buildings.

Although the vote was upheld, the opposition forced new elections by boycotting the two parliamentary votes on a new president, leaving the Communists' candidate one vote short of confirmation and causing the dissolution of the parliament.

The snap elections on July 29 gave the Communist Party 12 seats fewer than the 60 they won in the April 5 elections, with Lupu inspiring the Democratic Party, which did not get enough votes to enter the previous parliament, to 13 seats.

If the fourth attempt to elect a president fails, acting president and parliamentary Speaker Mihai Ghimpu will be forced to dissolve the legislature and set early parliamentary polls.

However, a new general election cannot be held before next fall.