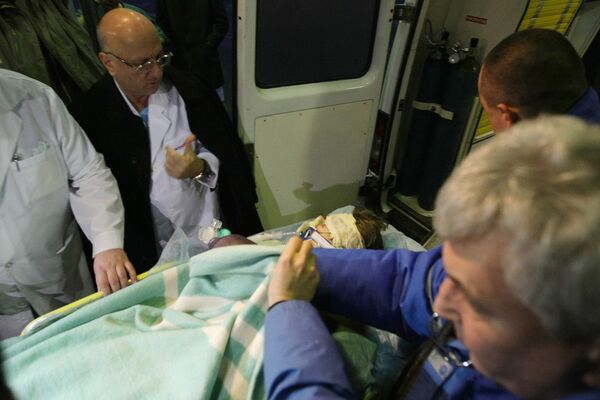 The number of people killed by a nightclub fire in the Urals city of Perm has risen to 112, the regional emergencies service said on Sunday.

The number of people killed by a nightclub fire in the Urals city of Perm has risen to 112, the regional emergencies service said on Sunday.

"According to the latest data, 112 people were killed as another woman died at a hospital in Perm," the emergencies service said.

The tragedy occurred on the night of December 4-5 during a party to celebrate the Lame Horse club's eighth anniversary when an indoor fireworks display started a fire that consumed most of the 500-square-meter venue.

Many victims were trapped and choked on smoke as they attempted to escape through the club's single exit.

Over 120 were injured in the nightclub fire, with 98 people with severe burns and injuries delivered to Russia's best burn treatment centers and hospitals in Moscow, St. Petersburg and Chelyabinsk in the Urals. As many as 26 people in grave though stable condition were staying at Perm hospitals, the emergencies service said.

A criminal case has been opened for violations of fire regulations that resulted in multiple deaths, which carries a maximum sentence of seven years in prison.

President Dmitry Medvedev, who declared Monday a day of national mourning, accused those running the club of gross negligence, and called for harsh punishment.