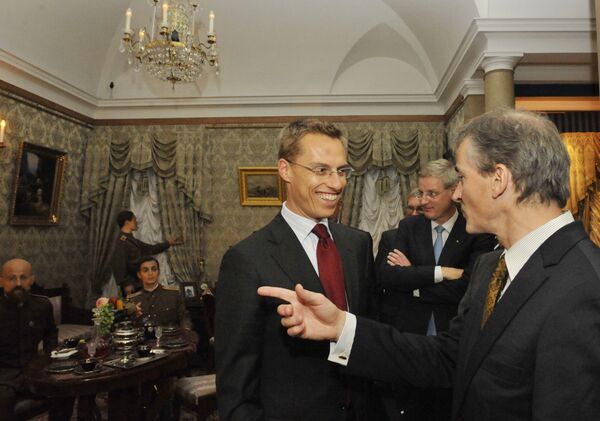 © RIA Novosti . Eduard Pesov
/
Go to the photo bank
Subscribe
Russia has to show how its proposed treaty on European security would be an improvement on the continent's current institutions, Finland's foreign minister said on Tuesday.

Russia has to show how its proposed treaty on European security would be an improvement on the continent's current institutions, Finland's foreign minister said on Tuesday.

"I believe that European security has been very well served over the past 60 years by three organizations - the OSCE, the EU and NATO. So it is necessary to prove the added value of a new security structure," Alexander Stubb told journalists on the sidelines of the OSCE ministerial meeting in Athens.

President Dmitry Medvedev first suggested a new treaty on European security in June 2008, proposing that the principle of indivisible security be legally sealed in international law, preventing any state or organization from strengthening their security at the expense of others.

A draft of such a treaty was posted on the Kremlin web site on Sunday, and has been sent to heads of state and chief executives of the EU, NATO, the Organization for Security and Cooperation in Europe (OSCE), the Collective Security Treaty Organization (CSTO) and the post-Soviet Commonwealth of Independent States (CIS).

The draft document says, in particular, that "in exercising its right of self-defense under Article 51 of the Charter of the United Nations, it shall be entitled to render the attacked Party, subject to its consent, the necessary assistance, including the military one, until the UN Security Council has taken measures necessary to maintain international peace and security."