Obama does not need to tell anyone about Afghanistan 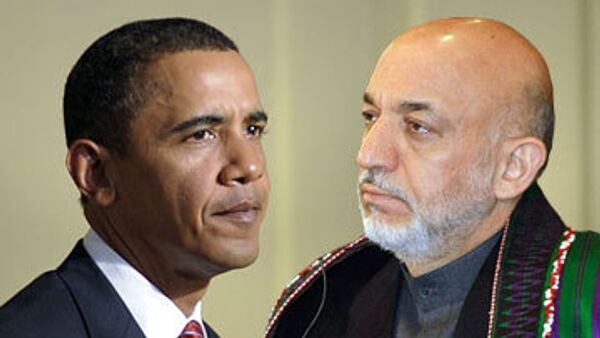 © Сollage by RIA Novosti
Subscribe
Dmitry Kosyrev, RIA Novosti political correspondent. Strictly speaking, it is not clear why Barak Obama needs to disclose his long-awaited new strategy for Afghanistan, why he needs to travel to West Point to do so, and so on. After all, everything down to the minutest details is already public knowledge.

Dmitry Kosyrev, RIA Novosti political correspondent. Strictly speaking, it is not clear why Barak Obama needs to disclose his long-awaited new strategy for Afghanistan, why he needs to travel to West Point to do so, and so on. After all, everything down to the minutest details is already public knowledge.

Right down to the way he’ll be dressed (in an ordinary suit instead of camouflage, the White House announced – it was George W. Bush who loved playing soldier). It goes without saying that the time of his appearance is also known. And the content of his speech, of course, which the leaders he phoned beforehand know, including Russian President Dmitry Medvedev, Afghan President Hamid Karzai, the leaders of Germany, the UK, India, China and others. And it is clear that the American public has also been informed beforehand.
The number of additional troops to be sent to Afghanistan is also known –34,000 (there were disputes within the administration over a “range” from 10,000-40,000).

But it is not a matter of numbers, and the significance of Obama’s decisions is not only in that military presence will be increased. Obama’s main objective is to state the goals and purpose of the entire campaign – goals with an exit strategy that will leave behind a normal country for the Afghans themselves. In order to accomplish this, with U.S. help the Afghan army and police will be enlarged to the proper strength (from 90,000 to 134,000 next year alone). The Afghans will also have to gradually bear the burden the war themselves.

The next item on the agenda is possibly the most important. This is the role of Afghanistan’s neighbors in the coming events. The U.S. is asking them (Obama is smart enough not to demand) to create a “new system of relations” in the region, based on the principles of non-intervention and with growing economic and cultural ties with Afghanistan.

Pakistan is not simply a neighbor, but a key participant, if not the object of the entire military operation. Therefore, Pakistan is being offered expanded strategic partnership on the condition that the Pakistani military play a key role in military operations against Al-Qaeda, the Taliban, or whatever it is they’re calling it this week.

This is really interesting, because it will take herculean efforts on the part of the U.S. in the large region of South and Central Asia, and will require an active U.S. military presence there, which broadly speaking, means a sea change in global politics. And then, if we follow Obama’s military logic, the U.S. will evidently stay in the region – even though the military may leave. But the U.S. will have to learn to work differently than it has recently in places such as Iraq or Uzbekistan.

In general, if the U.S. wants to succeed, it will have to learn a great many things.

Therein lays the specific significance of the entire event, and of all of these months-long mental contortions within the U.S. administration, which are now coming to a close with an almost ritualistic speech by the President at West Point. The U.S. will need to re-learn how to behave on the world stage, or else it will fail again. The political class and the country’s educated class in general understand that these subjects urgently need to be discussed. And such discussions are already taking place. For example, The Washington Post has listed previous examples of “nation-building” (and this is the specific thinking on what is being done in Afghanistan – that a new nation needs to be built from scratch). And it lists Kosovo and East Timor as models of such “nation-building”; in other words, the most wretched and disastrous stories of the ‘90s. However, the discussion is only beginning.

Of course, traditionalist Americans and Conservatives are for the moment setting the tone of the discussion, trying to prove that the U.S. was, is and always will be right, and that failures happened because of coincidences and trifles. If such-and-such hadn’t happened, we would have won the Vietnam War and the Korean War before it… Well, if the debate is not suddenly ended, then it will go on for a long time and, we hope, change the U.S. after all.

But nobody is expecting the U.S. to restrict its activities to within its own borders. Somalia, where the U.S. decided to cease operations after 18 servicemen died (in 1993), is currently being mentioned often. Now the veterans of that operation are saying that if efforts equal to today’s Afghan campaign were applied, something could have been achieved. After all, there’s no way to hide from the fact that the 1993 operation was necessary and that Somalia should have been dealt with earlier rather than later, just as Afghanistan and Pakistan cannot be left to their own devices.

In these efforts, the U.S. is irreplaceable. The changed, grown-up U.S. will be supported by many countries and forces in the world, which must only be ruled jointly.