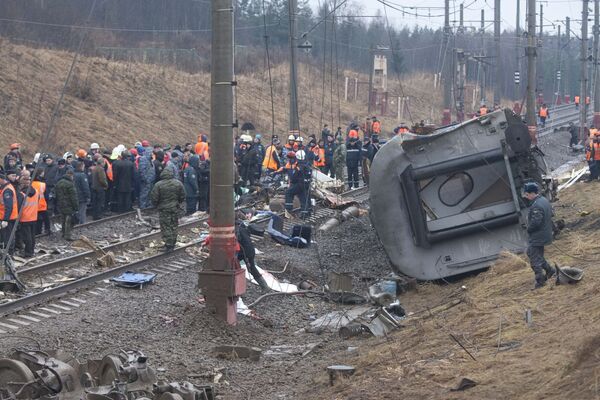 A train crash caused by a bomb attack in northwest Russia left 25 people dead and 26 are listed as missing, Emergencies Minister Sergei Shoigu said on Sunday, citing the latest data.

The attack occurred late on Friday near the border between the Novgorod and Tver regions, some 400 kilometers (250 miles) northwest of Moscow when three carriages of the Nevsky Express high-speed train derailed. The train was carrying hundreds of passengers from Moscow to St. Petersburg.

The derailment was caused by an explosive device equivalent to 7 kg of TNT. Earlier reports said 26 people were dead, 96 injured and 18 missing in the train crash.

Meanwhile, Health and Social Development Minister Tatiana Golikova said there were six foreigners on board the train, with two of them, an Italian and a Belgian, injured in the crash. The data on the other four - an Azerbaijani, two Ukrainians and a Belarusian - were being specified.

Golikova also said that 85 people were staying in hospitals after the deadly train crash.

Meanwhile, 19 out of 25 victims of the train crash had already been identified by their relatives, she said.