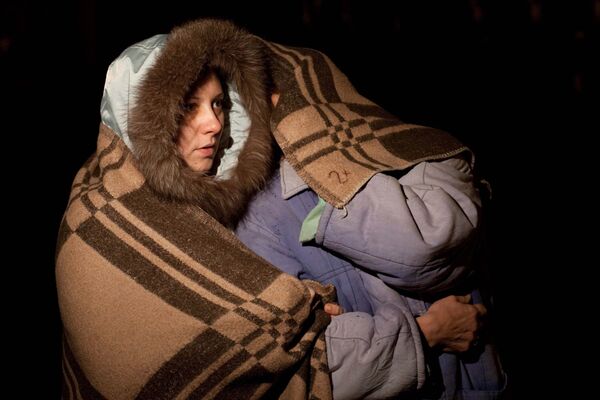 Survivors of a terrorist attack on a luxury high-speed Moscow-St. Petersburg train that killed at least 26 people described on Saturday the chaos and confusion in the aftermath of the blast.

Survivors of a terrorist attack on a luxury high-speed Moscow-St. Petersburg train that killed at least 26 people described on Saturday the chaos and confusion in the aftermath of the blast.

"The last two carriages were completely crushed. It was the kind of thing I've only seen in horror films," a passenger who identified himself as Alexander told RIA Novosti. Another passenger spoke of "people being thrown about like matches."

"There was nothing we could do to help the injured. There was no doctor, no first-aid kit on board the train," Stanislav Aranovsky told the Delovoi Peterburg news website. "It seems like there wasn't anything to provide even the most basic assistance."

"There weren't even any torches to look for the injured with," he added.

"A lot of time valuable time was lost, time that could have been used to save people," he went on. "The apparent absence of first-aid kits on such a train was simply unbelievable, especially in the light of the 2007 blast. No one even thought to have reserves of bandages."

"The lights went out in the carriage," Irina told the Komsomolskaya Pravda paper. "They asked us all to get out of the train. They didn't tell us anything, they were just running about asking if anyone had any medicine."

One of the survivors was businessman Nikolai Kovarsky, who described the moments after the attack in his blog.

"Gloom, at first a silence, and then the moans and cries of the injured," he wrote. "I found myself on the floor...covered in blood...other people's."

After breaking out of the carriage, Kovarsky said he saw many people with "serious injuries" and "immobile bodies, but it was too dark to count them all."

"At last, after about an hour and a half, the emergency services and medics arrived," he said, adding that "they worked fast, and they knew what they were doing."

Russia's health minister said that 18 people listed as missing after the attack had not been located. Rescue workers are assuming they independently left the scene of the blast.

Interior Minister Rashid Nurgaliyev issued on Saturday a description of one of the main suspects. He told journalists the suspect was "over 40, stocky and ginger-haired."

The announcement came after Russian Railways chief Vladimir Yakunin said that a second, weaker bomb had exploded on Saturday at 2:00 p.m. (11:00 GMT) at the site of the attack, but that it had not caused any injuries. The device went off as investigators were working at the scene.