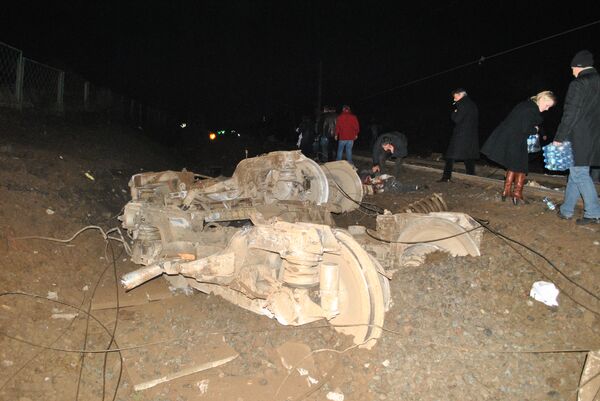 Twenty-five people died in the derailment of a Nevsky Express train that could have been a terrorist attack, and 95 were injured, according to the latest data from the Russian health minister

MOSCOW, November 28 (RIA Novosti) - Twenty-five people died in the derailment of a Nevsky Express train that could have been a terrorist attack, and 95 were injured, according to the latest data from the Russian health minister.

Three cars of the Nevsky Express bound from Moscow to St. Petersburg derailed Friday evening on the Alyoshinka-Uglovka railroad section near the town of Bologoye on the border between the Tver and Novgorod regions, and a law enforcement source said it could have been a terrorist attack.

"Preliminarily, an explosion occurred under the ninth car," the source said, adding that the death toll in the accident that occurred some 350 km (220 miles) from Moscow could rise as new bodies were being taken out of the deformed railroad cars.

The train carried 661 passengers and 21 railroad employees. Some passengers said they heard a loud bang and some also saw a crater under the train.

"There was a bang. The last two cars almost fell apart. I've seen such things only in movies," passenger Alexander said.

Injured passengers, who mainly received head wounds, have been sent to hospitals in nearby towns. Those not injured left the accident site in cars, buses and on another train bound for St. Petersburg. Seriously injured passengers will be taken to Moscow hospitals by helicopters if necessary, emergencies officials said.

The Russian Railways (RZD) railroad monopoly earlier said that an act of sabotage could have derailed the train, but power outage on the railroad was also considered a possible reason for the accident.

A Moscow police source told RIA Novosti earlier that the train driver had used the emergency brakes just before the derailment.

Russian Railways said trains would, for the time being, travel along a bypass route after the accident to keep railroad communication between the two largest Russian cities running. The railroad monopoly president, Vladimir Yakunin, who is at the tragedy site, said over 60 trains carrying some 27,000 passengers were forced to change their route. They are expected to be delayed by at least 8 hours.

Four technical trains have arrived at the site to repair the damaged railroad tracks and power lines, RZD also said.

It takes Nevsky Express trains that can travel at 200 kilometers per hour (124 mph) some four hours to travel about 650 kilometers from Moscow to St. Petersburg.

In 2007, a blast derailed a Nevsky Express train on the same railroad line, injuring 60 people, with about 30 hospitalized. An investigation into that terrorist attack is underway, with the main suspect still on the wanted list.