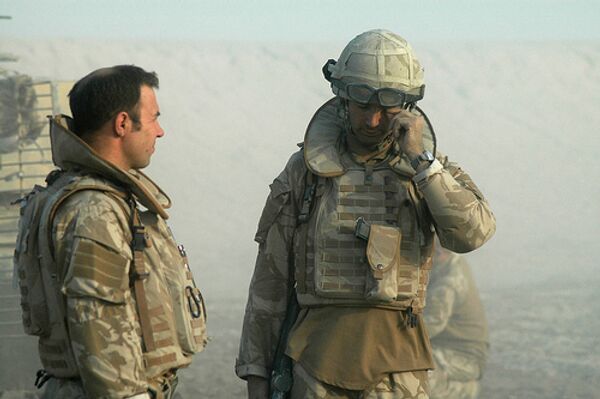 © newseditor.co.uk
Subscribe
NATO has been actively discussing the possibility of establishing a joint European army for a long time. The latest discussion was triggered after The Times published an interview with Italian Foreign Minister Franco Frattini on November 15, 2009.

MOSCOW. (RIA Novosti military commentator Ilya Kramnik) - NATO has been actively discussing the possibility of establishing a joint European army for a long time. The latest discussion was triggered after The Times published an interview with Italian Foreign Minister Franco Frattini on November 15, 2009.

In his interview, Frattini said Italy would push for the creation of a European Army after the "new Europe" takes shape at this week's crucial November 19 EU summit following the adoption of the Lisbon Treaty.

According to Frattini, the creation of a European Army would serve as a logical continuation of EU integration and would become an essential step in preserving the EU's status as a global power center.

He warned that "there is the risk that Europe will become irrelevant," and that it would be bypassed by a hypothetical U.S.-Chinese alliance.

Although a Chinese-U.S. alliance seems far-fetched, many analysts say mutual strategic rapprochement can make it a reality in the foreseeable future.

Frattini's statement is probably the most interesting aspect of discussing the European Army issue and the EU's future as a political entity. Although various formats of a joint European Army have been discussed since the 1970s, a hypothetical political threat from the U.S. has been cited as a possible motive for the first time.

"If we do not find a common foreign policy, there is the risk that Europe will become irrelevant. We will be bypassed by the G2 of America and China, which is to say the Pacific axis, and the Atlantic axis will be forgotten. We need political will and commitment, otherwise the people of Europe will be disappointed. People expect a great deal of us. After Lisbon (The Lisbon Treaty - Ed.) we have no more alibis," Frattini said.

Apart from these apprehensions, Frattini used traditional arguments, including the need for more effective coordination of joint European military operations.

Instead of establishing more effective joint organizations, the EU involves independent national units under joint command in such operations.

Frattini cited Afghanistan as an example, where units from many European nations currently operate, and reiterated the need for deploying a joint naval fleet or air force in the Mediterranean or other areas crucial to European security.

According to Frattini, a joint European Army would allow EU nations to cut back on military spending.

In reality, financial and administrative arguments in favor of saving resources and boosting management efficiency have far more profound implications.

The United States currently dominates NATO military operations. The U.S. military potential either equals or frequently exceeds the forces allotted by all other NATO countries. Consequently, Washington dictates the pace of most operations, appointing most commanding and staff officers. In effect, NATO operations amount to operations involving the U.S. Armed Forces and their allies.

Such U.S. domination will be seriously impaired, if the EU creates its own armed forces. The Pentagon would then have to deal with an equal partner, rather than a disunited community of political clients. The EU's contribution would allow it to demand an equal say in charting long-term priorities and methods of operation.

Even such undisputed EU military leaders as France, Germany and Italy still cannot claim the right to have an equal say on such matters.

At most, Washington's European allies can refuse to take part in specific operations. Still this is no problem because the United States easily recruits the required forces from among new NATO members siding with Washington to a greater extent than Brussels, or from its own reserves.

The United Kingdom, another European leader, has supported all U.S. initiatives in the past few years, providing substantial military, headquarters, intelligence and intellectual support.

Although it is hard to predict the result of the new Italian initiative, it will both be supported and rejected. Germany, Spain and France advocating European independence on the issue of strategic choice and its implementation are likely to support this initiative.

The governments of Eastern European countries and former Soviet republics, which prioritize NATO's traditional anti-Russian bias and the NATO-U.S. alliance, rather than an alliance with Germany and Italy, will definitely oppose Italy's proposal.

Naturally, such disagreements do not imply that NATO will soon disintegrate; nor do they highlight the beginning of this process. However, the seemingly indestructible monolithic NATO is obviously losing its homogeneous nature in new conditions.