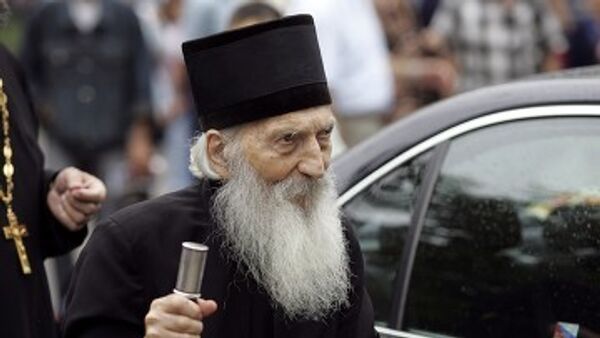 President Boris Tadic called the death of the patriarch "a huge loss" and said Pavle "united the nation." Pavle called for peace and reconciliation in the 1990s during ethnic conflicts that resulted in the breakup of Yugoslavia.

The patriarch, who was elected to head the Serbian Orthodox Church in 1990, died Sunday of cardiac arrest during his sleep after having been hospitalized for two years in the Belgrade Military Hospital, doctors said.

In the year 2000, the Serbian Church called on Slobodan Milosevic, then president of the Federal Republic of Yugoslavia, to resign, after NATO air raids put an end to his crackdown on Kosovo Albanians.

Balashov said he symbolized "the spiritual unity of the Serb nation" and added that Pavle was "a big friend of the Russian Orthodox Church."

Patriarch Pavle will be buried in the Rakovica Monastery in the capital Belgrade on Thursday, local news agencies said after a meeting of the Church's Holy Synod.