Suspect confesses to murder of lawyer, journalist in Moscow 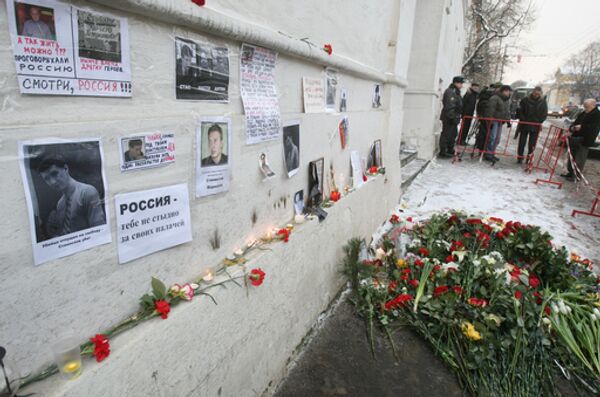 One of two suspects detained on suspicion of involvement in the January murder of lawyer Stanislav Markelov and trainee journalist Anastasia Baburova has confessed, the head of Russia's FSB said on Thursday.

MOSCOW, November 5 (RIA Novosti) - One of two suspects detained on suspicion of involvement in the January murder of lawyer Stanislav Markelov and trainee journalist Anastasia Baburova has confessed, the head of Russia's FSB said on Thursday.

Markelov, 34, who represented a family whose daughter was murdered by a Russian officer in Chechnya, and Novaya Gazeta journalist Baburova, 25, were shot on January 19 in downtown Moscow, not far from the Christ the Saviour Cathedral. Markelov died at the scene and Baburova lost her struggle for life shortly afterwards in hospital.

Alexander Bortnikov told Russian President Dmitry Medvedev that the investigation into the murders had been completed and one of the suspects had confessed to the charges and was giving evidence.

"A decision was made to arrest the suspects on November 3. We have received incriminating materials concerning those people who participated in the crime - first hand evidence, as well as concrete information in the form of a confession by a suspect," Bortnikov told the president.

The suspects, Muscovites Nikita Tikhonov, born in 1980, and Yevgeniya Khasis, born in 1985, were detained on November 3 and 4.

Investigators said they believe the killing of Markelov was connected to his professional activities.

Police said however that Baburova was an "accidental witness." Media reports said, however, that Baburova had attempted to stop the killer, but he shot her in the head before making his escape.