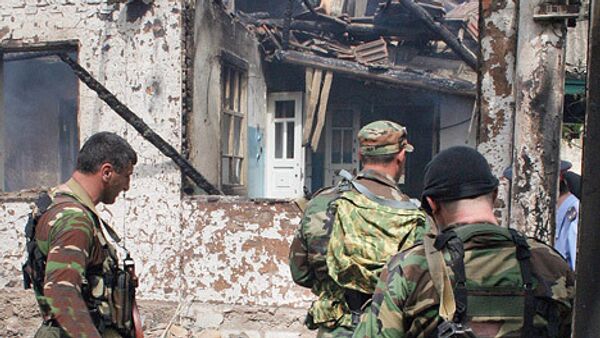 MAKHACHKALA, November 2 (RIA Novosti) - Three militants were killed early on Monday in a special operation in the capital of the southern Russian republic of Dagestan, a regional Federal Security Service official said.

"Three militants, including a young woman, were killed in the Khasavyurt district [of Makhachkala] as the result of a special operation," the spokesman told RIA Novosti, adding that no servicemen were injured.

He said one of the militants was identified as Arslan Egizbayev, the leader of a militant group operating in Khasavyurt district. The two others were Amir Salimgereyev and Ashura Magomedova.

The militants were surrounded in an apartment block overnight by Federal Security Service personnel. They refused to surrender and were killed in a shootout when they tried to escape from the building, the spokesman said.

He added two Kalashnikov assault rifles, three grenades and lots of ammunition were found in the apartment where the militants were hiding.

Dagestan and other mainly Muslim republics in Russia's North Caucasus, including Chechnya and Ingushetia, have seen a marked rise in militant violence of late, with skirmishes and attacks on police and other officials being reported almost daily.