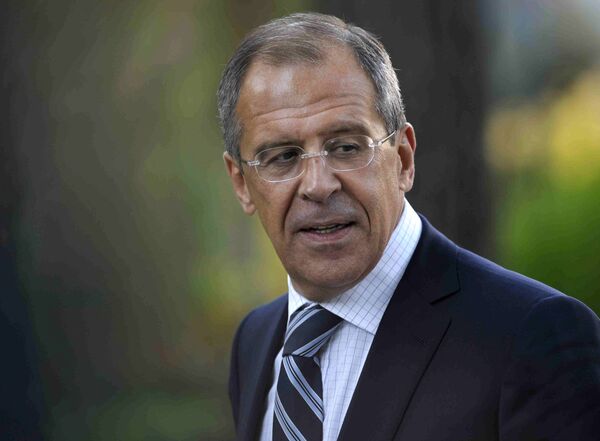 On Friday, Russian Foreign Minister Sergei Lavrov gave an interview to editors-in-chief of RIA Novosti, the Voice of Russia radio station, and the Russia Today TV channel in which he discussed topical issues of Russian foreign policy and current global developments.

Lavrov touched on Russia’s attitude towards the new American missile defense plans, the possible accession of third-party countries to the future Strategic Arms Reduction Treaty, a “resetting” of Russian-British relations, and the G8 and G20 summits to be held in 2010.

This is not the first time the Russian foreign minister has been interviewed in this format. After an April meeting with the editors-in-chief, Lavrov promised to give such interviews regularly.

On the pretext of countering a probable missile threat from Iran, the Bush Administration planned to deploy ten interceptors in Poland and a radar in the Czech Republic by 2013.

On September 17, President Barack Obama and Secretary of Defense Robert Gates announced that they had revised plans for the missile defense shield. The U.S. has not abandoned the idea of deploying missile defence elements in Europe; rather, it only postponed the date of that deployment until 2015. The entire missile defense shield, including the ground infrastructure, will be completed in four stages, and is expected to be finished by 2020.

“By giving up on missile defense plans, the U.S. has worked out an alternative system that will not create any difficulties linked with the third positioning area at the initial stage. But we want more clarity on the further stages,” Lavrov said.

He added that the parties have been actively working on the two presidents’ directives “to try and do their best to reach a new agreement on strategic arms reduction.”

At the same time, the minister noted that although the parties have reached an agreement on a number of issues, there are several positions “that are yet to be translated into the language of accord.”

In this respect, Lavrov highlighted two issues: the relationship between strategic offensive and defensive weapons, and the program being developed in the United States for strategic extra-nuclear weapons, whose destruction capacity is the same as that of nuclear missiles.

THIRD-PARTY COUNTRIES AND THE START TREATY

According to Lavrov, third-party countries possessing nuclear arms should eventually join the START treaties between Russia and the U.S.

“As for other nuclear countries joining the cause, evidently this will soon become a practical necessity, because if we reach the reduction agreement Russia is suggesting, its nuclear potential will be comparable to those of other official nuclear states,” he said.

The acting Russian-American START Treaty will expire in December 2009—a deadline prior to which Moscow and Washington hope to make a new agreement.

Signed in 1991, START I is the basic Russian-American agreement for disarmament. It binds the signatories to reduce the number of nuclear warheads to 6,000 and their delivery vehicles to 1,600 on either side.

A supplementary treaty concluded in Moscow in 2002 limited the number of each party’s deployed nuclear warheads to 1,700-2,200.

Immediately after they met in London in April 2009, the two presidents agreed to begin consultations between experts on drafting a new agreement. The latest consultations, held in Geneva in early October, brought the parties to the stage of elaborating the relevant language.

The preparation of a new START treaty was among the principal items on the agenda of U.S. Secretary of State Hillary Clinton during her visit to Moscow.

Lavrov said that Russia has always been open to dialogue, and is willing to push the reset button in its relations with Britain, as it has done with the United States.

A chill came over relations between Moscow and London at the start of the present decade, when Britain refused to extradite several Chechen separatist leaders and Boris Berezovsky, who had been charged with financial crimes.

In 2007, Britain suspected a Russian citizen, Andrei Lugovoi, of using radioactive polonium to poison Alexander Litvinenko, a former FSB officer who had successfully sought and received asylum in Britain. Moscow refused to extradite the suspect.

Bilateral relations were further strained by the British Council controversy, and the two countries’ mutual expulsion of diplomats and reciprocal charges of espionage.

“We are willing to push the reset button… As was the case with the U.S., this costs Russia nothing, because it is always ready to start a dialogue and partnership on the basis of equality,” the foreign minister said.

U.K. Foreign Secretary David Miliband is expected to visit Moscow in early November. This will be the first visit by the British secretary of state for foreign and commonwealth affairs to Russia in five years. Jack Straw was the last British foreign secretary to come to Moscow on an official visit. That was in July 2004.

Lavrov and Miliband expect to discuss the entire scope of Russian-British relations and an extensive number of international issues.

As Lavrov said during the interview, the G20 format does not mean the end of the G8. They deal with different problems and therefore are not mutually exclusive.

“There is nothing to set the two forums against each other,” he said.

Lavrov added: “the G8 will stay as it is. Its next meeting, in Canada, has been scheduled for June 25 to 27. There will be a parallel G20 summit.”

The G8 will tackle its own issues because its agenda “is incomparably more extensive than the range of issues intended for the authority of the G20.”

Lavrov also spoke about Iranian-Israeli tensions due to the threat Israel sees in the Iranian nuclear program, and about the Russian-Kazakh-Belarusian Customs Union.

He said he deems it necessary “to work towards Iranian-Israeli settlement”, which he said is not impossible.

As for the Customs Union, the minister said it was “ready to begin operating. Consolidated documents have been prepared, and it is ready to come into effect on January 1.”

“The Customs Union will be long-lived, and we will soon feel the practical benefit of its entry into force,” he added.