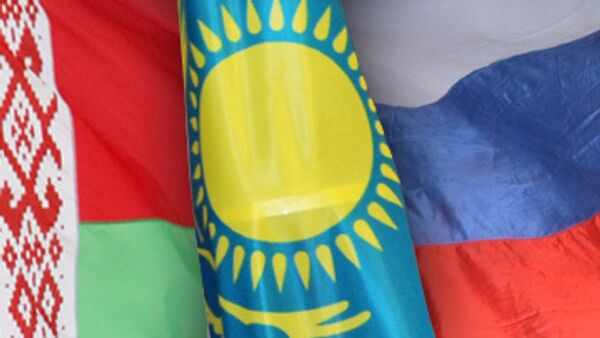 The three post-Soviet countries agreed in early June to form a customs bloc. Its Customs Code will be presented for approval to the heads of the three states in November. Unified customs regulations are due to come into effect at the start of 2010.

"The customs union is ready to begin its work, and is due to be launched on January 1," the minister said during an interview with RIA Novosti, the Russia Today TV channel and The Voice of Russia radio station.

"The Customs Union is here to stay and we will soon benefit from it," Lavrov said.

The three countries earlier announced that they would seek to join the World Trade Organization simultaneously, with a joint bid through their Customs Union.

Russia's chief WTO negotiator, Maxim Medvedkov, said the date of the next round of talks on joining the global trade body would be made by chairmen of the three countries' working groups following consultations with the WTO members.

"We expect the decision to be made by the end of this year. The necessary materials will be submitted to the WTO in the next two or three weeks," he said.

Kyrgyzstan has said it would also like to join the union.