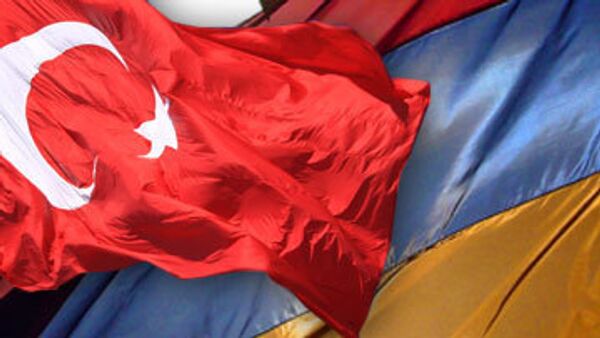 Russia will continue to support Armenia and Turkey's efforts to normalize their relations, Russia's envoy to the Organization for Security and Cooperation in Europe (OSCE) said on Thursday.

MOSCOW, October 15 (RIA Novosti) - Russia will continue to support Armenia and Turkey's efforts to normalize their relations, Russia's envoy to the Organization for Security and Cooperation in Europe (OSCE) said on Thursday.

"Russia is ready to continue to support the process of normalizing Armenian-Turkish relations, including through further implementation of mutually beneficial bilateral cooperation projects," Anvar Azimov said.

He urged the parliaments of the two countries to ratify as soon as possible accords on restoring diplomatic relations and opening borders, signed on October 10 in Zurich. The agreement is expected to meet fierce opposition from nationalist parties in both countries.

Armenian nationalist groups have criticized the accords for failure to take into account the Turkish genocide against Armenians in WWI. Turkey has demanded that Armenia drop its campaign to have the killings of thousands of Armenians internationally recognized as genocide, saying many Turks were also killed in the war.

Turkey closed its border with Armenia in 1993 in a show of support for Azerbaijan, a predominantly Muslim, Turkic-speaking ally of Ankara, following a bloody conflict over Nagorny Karabakh between the two republics.

On October 14 the presidents of the two countries, Armenia's Serzh Sargsyan and Turkey's Abdullah Gul, met ahead of the World Cup qualifier between their national football teams. Turkey won 2-0.

Gul visited Armenia's capital Yerevan last year for the first leg of what has been called "football diplomacy."