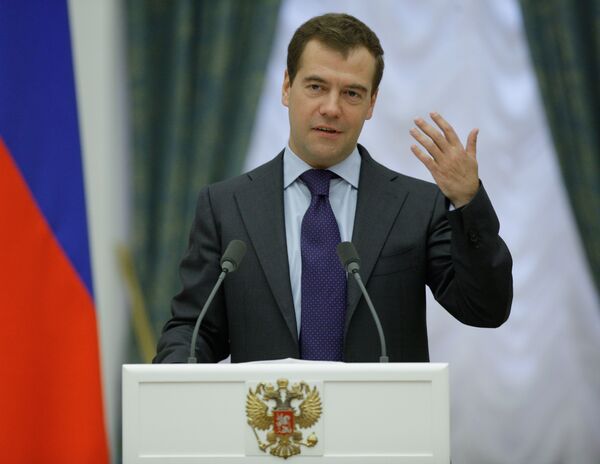 © POOL
/
Go to the photo bank
Subscribe
Russian President Dmitry Medvedev said on Monday the results of Sunday's regional polls were a testimony to the "moral and legal" authority of the ruling United Russia party.

MOSCOW, October 12 (RIA Novosti) - Russian President Dmitry Medvedev said on Monday the results of Sunday's regional polls were a testimony to the "moral and legal" authority of the ruling United Russia party.

"The party proved it has both the moral and legal right to form executive governmental bodies," Medvedev said at a meeting with the party's leading members in the Kremlin.

The president urged United Russia to repay the trust the electorate had shown in it.

Medvedev also praised most the first ever municipal elections in Russia's North Caucasus republics of Ingushetia and Chechnya as a "long-awaited event".

However, the opposition said there were cases of ballot stuffing, and that the ruling party was given more media opportunities during the election campaign.

"What happened at polling stations cannot be explained," he told the press, referring to expulsions of observers and refusals to issue voting records at certain polling stations.

The ultranationalist LDPR complained of "strong pressure" and the "illegal refusal" to register candidates from northwest Russia's republic of Karelia to Sakhalin in the Far East.

Both the LDPR and the Communists said they had reported numerous cases of voting violations to the relevant bodies, but had received no reply. Communist Party leader Gennady Zyuganov said party monitors had reported "barbarity" on election day.

In central Moscow late on Monday, police arrested some 30 people taking part in an unsanctioned protest against the results of the polls in the capital, where United Russia won 66% and the Communist Party 13%. They were the only parties to overcome the 7% threshold to take seats on the city council.