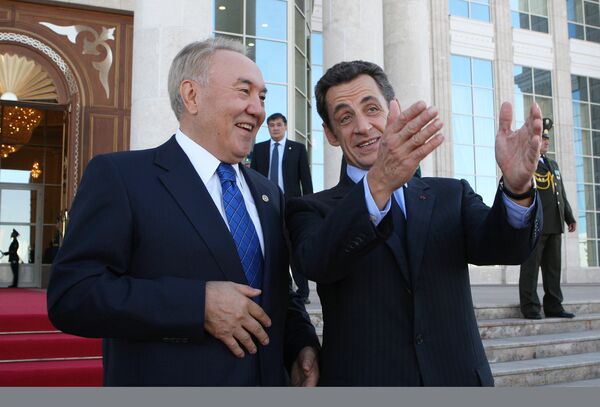 Sarkozy is visiting the energy-rich Central Asian country with a large delegation of French officials and businessmen in energy, aerospace and other fields.

As part of his visit, Kazakh oil and gas company Kazmunaigaz and the France-based international pipeline contractor SPIE Capag signed a memorandum of understanding on the Yeskene-Kuryk oil pipeline. The $2 billion pipeline is designed to pump 56 million to 80 million metric tons of oil from the Kashagan field to the Caspian along a route of some 770 km (479 miles) bypassing Russia.

The two countries also signed an intergovernmental deal on cooperation in the research and peaceful use of space and another agreement to establish and use an Earth remote sensing system and a spacecraft assembly.

Astana also agreed to allow Paris to transit military cargoes and troops to Afghanistan via Kazakhstan.

"We need Kazakhstan to resolve the crisis in Afghanistan and in Iran, and to establish new relations with our friends in Russia in the fight against extremism," the French president said.

Sarkozy praised Kazakhstan for advancing toward OSCE standards. Kazakhstan will become the first former Soviet republic to hold the rotating OSCE chairmanship when it takes over the post next year.

"I decided to support Kazakhstan [for OSCE chair] because Kazakhstan is striving to honor in full all the norms and standards of the OSCE," the French president said.

"As the OSCE chair, our goal will be to bring Europe closer to the [Central Asian] region," Kazakh President Nursultan Nazarbayev said.

"Our key goal is to maintain and strengthen our sovereignty, improve the country's economy, increase living standards and advance gradually to the civilized world, accepting all the values of democracy and freedoms of the West," Nazarbayev said.

In its annual human rights report for 2008, the U.S. State Department criticized Kazakhstan for "severe limits on citizens' rights to change their government; military hazing that led to deaths; detainee and prisoner abuse," as well as the lack of an independent judiciary and freedom of assembly and expression.