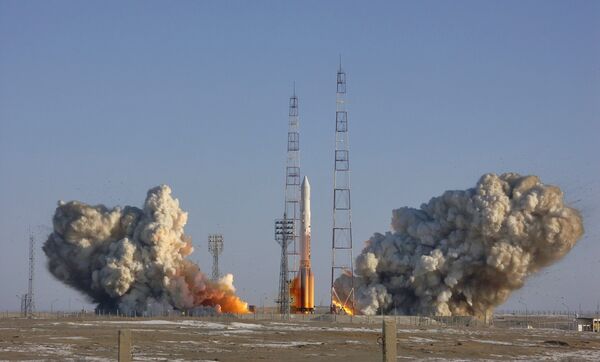 © Sergei Kazak
/
Go to the photo bank
Subscribe
Russia has launched a Proton-M heavy carrier rocket with the Nimiq 5 telecommunications satellite on board from the Baikonur space center in Kazakhstan.

MOSCOW, September 18 (RIA Novosti) - Russia has launched a Proton-M heavy carrier rocket with the Nimiq 5 telecommunications satellite on board from the Baikonur space center in Kazakhstan, the Federal Space Agency Roscosmos said.

Telesat Canada signed a contract with International Launch Services (ILS) in 2007 for the launch of Nimiq 5 by an ILS Proton-M rocket with a Breeze booster.

Nimiq 5 is the fifth satellite in the grouping of Canadian geostationary telecommunications satellites owned by Telesat and used by satellite television provider Bell TV.

The satellite has 32 Ku-band transponders and is expected to become operational in 2010 to provide a wide range of high-definition and specialty television services to Bell TV and Dish Network subscribers in Canada and the United States.

Nimiq 5 has been built by Space Systems/Loral on the LS1300 platform, and has a service life of 15 years.

Earlier on Thursday, Russia launched a Soyuz 2.1b rocket with the Meteor-M domestic meteorological satellite and five mini-satellites, after two days of delays due to poor weather and technical problems.