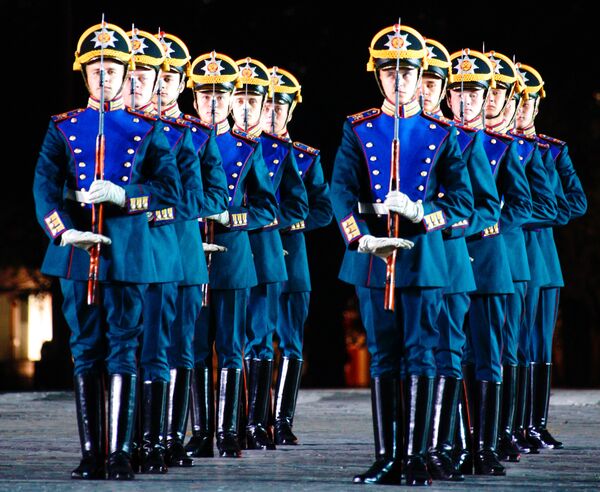 © RIA Novosti . Anton Denisov
/
Go to the photo bank
Subscribe
Russia will send an honor guards company to Libya to take part in a military parade dedicated to the 40th anniversary of the Libyan revolution on September 1

MOSCOW, August 28 (RIA Novosti) - Russia will send an honor guards company to Libya to take part in a military parade dedicated to the 40th anniversary of the Libyan revolution on September 1, a Russian business daily said on Friday.

Kommersant said a formal request to send a Russian military unit to participate in the parade in Tripoli was made by Libyan leader Muammar Qaddafi via Defense Minister Younis Jaber.

"An honor guards company from the Moscow garrison will be sent to participate in the parade in the Libyan capital. All expenses will be paid by the host country," the paper said, citing sources in the Russian Defense Ministry.

Moscow earlier said neither President Dmitry Medvedev nor Prime Minister Vladimir Putin would attend the celebrations in the Libyan capital, but that a delegation of state-level officials could be sent.

On September 1, 1969, a small group of military officers led by Qaddafi staged a bloodless coup against King Idris I, while he was in a Greek resort undergoing medical treatment. The revolutionary army officers abolished the monarchy and proclaimed the new Libyan Arab Republic.

Libya, which became an international pariah over its support for international terrorism in the 1980s and 1990s, has improved ties with the West and reinvigorated its contacts with Russia in recent years.

Qaddafi said during his visit to Moscow last year that bilateral relations in the past were mostly limited to military and political contacts, but now "the door to enhancing cooperation in civilian spheres is open to Russia."