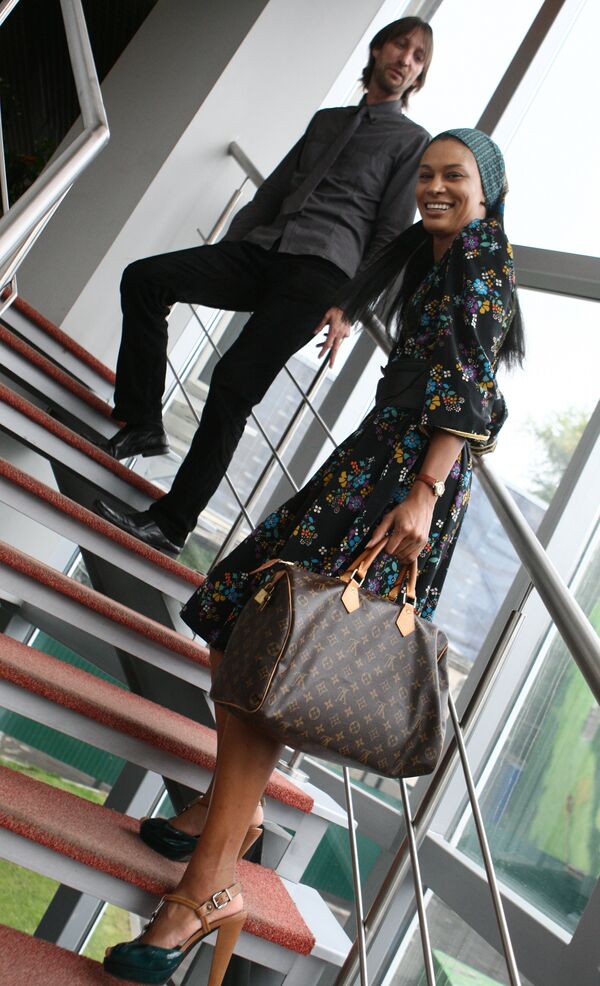 Former Canadian model Chrystal Callahan, who launched her own weekly  satellite TV program in English in the capital of Russia’s volatile  southern republic of Chechnya three months ago, talked to RIA Novosti correspondent David Burghardt during a recent visit to  Moscow on the highs and lows  of being involved in such a project.


I first met Chrystal, a tall, Canadian-American of mixed race, a little over two years ago when she was preparing to come to Russia for the first time to produce and film a documentary on young wrestlers hoping to get into the Russian Olympic team. The three teenage boys (13-14 years old) she had chosen to appear in the documentary were all from Chechnya and had grown up during the two wars with Russia in the 1990s and 2000s. Russia’s Caucasus region produces many of the country’s Olympic wrestlers. The film, called Greco-Roman Grozny, was an entry in Chechnya’s international film festival, Noah’s Ark. On both occasions, I accompanied her in the region as at that time she spoke no Russian and communication was extremely important for her.

During our first visit to Grozny, I arranged formal and informal meetings with the region’s ministers, the mayor and Chechen President Ramzan Kadyrov. Chrystal at that time was letting the officials know her plans for filming in the republic and all of them gave her the green light. This gave us the opportunity to travel around the republic and neighboring Ingushetia for almost three weeks.


On several occasions we met the Chechen minister for external affairs, ethnic policy and press, Shamsail Saraliev, who expressed an interest in launching a satellite TV program in English about the republic and half-jokingly asked Chrystal if she would be interested. She lightheartedly responded “yes” and on our second visit to Grozny, talks continued and this summer the first edition of her weekly program Highlights of the Week with Chrystal Callahan was broadcast. She has just completed the first season, with shooting for the second due to begin in mid-September.


The weekly 20-minute show is not broadcast along the lines of a standard evening news program. As the title indicates, it provides an overall look of what is happening in the republic. Usually the program starts out with a short spot on President Kadyrov’s activities inside the republic and official visits by Russian and foreign dignitaries. The program then expands to include interviews with politicians, sports personalities and businessmen, followed by cultural events. Many of the snippets involve Chrystal’s “uncomfortable and humorous” experiences in the republic like learning Chechen dances and songs, or even playing Chechen paintball. I personally watched her trying to milk a goat, which was one of the funniest things I’ve seen in Russia.

Chrystal said all the scriptwriting is up to her exclusively and she is not controlled or censored in what she broadcasts. She works with a small group of people from Grozny TV, including a translator, film crew and studio and editing staff when finalizing the content of each week’s program.


When I asked her if she considered the show to contain propaganda, she said that the definition did not fit. What she does is show people what Chechnya is all about from the viewpoint of a foreigner living in Grozny. She said there are many “spectacular” things to see in the republic and the people and culture are “beautiful.” Chrystal is not restricted to the capital and travels to other towns and villages to gather material and learn more about cultural life in the small republic.


Chrystal has had to adapt to life in Chechnya, a mostly Muslim republic, which is totally different from her native Toronto. For a start, apart from Moscow and a few other large cities, you seldom see black people walking the streets in Russia. It’s not every day you see a black model from Vogue magazine wearing a headscarf strolling down the main streets of Grozny…but now it has become an everyday occurrence. Chrystal does attract a lot of attention in the capital, but everyone knows her now and she’s become a real celebrity among the locals. When asked about all the attention she gets in the city, Chrystal said that thanks to all the years she spent on the catwalk as a model, she is able to block out the hundreds of eyes that follow her constantly and does not really notice anymore.

The program has gotten mixed audience ratings among locals, Russians and foreigners alike. The show’s target audience is Chechens living abroad but since it is also streamed on the Internet (www.chechnyatoday.com), more and more viewers are tuning in. Some say they enjoy seeing the new Grozny (which is not as “war-torn” as many Western news agencies report) and all the development in the republic. Others are more critical, wondering why a program in English is needed about Chechnya and why a foreigner is working at a state-run television station. Many people are unaware how many foreigners work in state-run news agencies (RIA Novosti, Russia Today, Moscow News, and others), but 99% of them work in Moscow. Chrystal is that 1% who has an opportunity to try something new in a place where very few foreigners have ever ventured.


When asked if she has ever been frightened since she arrived, Chrystal said “yes,” but mainly over whether she would manage to make a deadline or if an interview was cancelled at the last minute. She is not afraid of being in the city. She dines in restaurants in Grozny and is sometimes joined by her co-workers from the television station. She said she is not especially close to any of her colleagues because “everyone is busy with their own thing, their own program,” but if they end up in the same place, they are sure to sit together and chat.

One of my colleagues asked Chrystal if she had ever heard gunfire in the city. Chrystal laughed and said she hears gunfire almost every weekend from outside her office which overlooks one of the central squares in Grozny. She explained that gunfire was part of the Chechen tradition of firing into the air in celebration during weddings.


Chrystal is looking forward to returning to Grozny in September to start her second season and has a lot of new ideas and interesting material for her forthcoming shows.