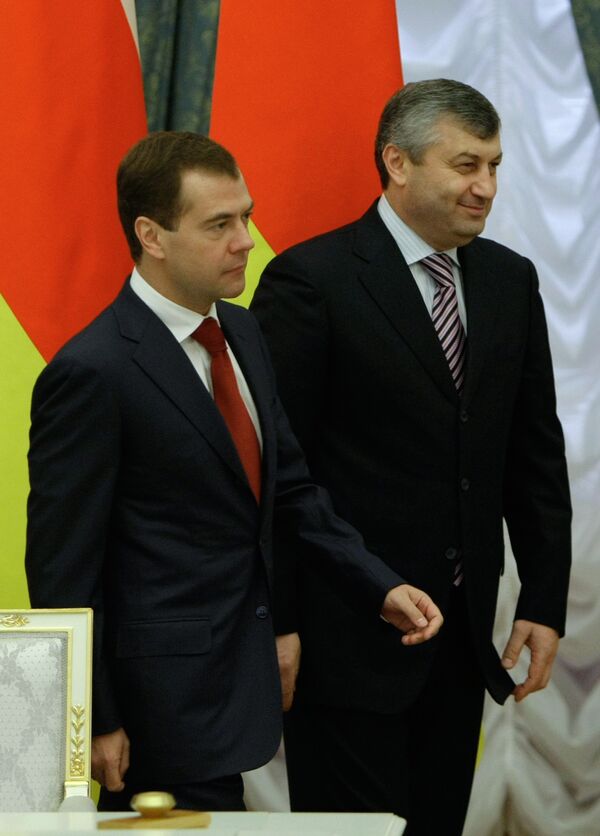 Russian President Dmitry Medvedev arrived in South Ossetia on Monday on his first visit to the former Georgian republic, recognized as independent by Russia last August.

At a meeting with his South Ossetian counterpart, Eduard Kokoity, Medvedev said Russia was ready to develop contacts with the republic and implement joint projects in various spheres.

"We have a number of projects to restore the republic's economy and social sphere. We are sure to implement them, because there is much to be done," the Russian leader said, adding that it would also be necessary to maintain defense ties.

Kokoity thanked the Russian leader for 'the salvation' of his small nation.

"The people of South Ossetia thank you for the support and recognition of our state," Kokoity told Medvedev.

However, the Georgian reintegration minister slammed Medvedev's visit as a provocation.

"This is rather a symbolic visit on the day of the signing [of transit documents for] the Nabucco [project] which does Russia no credit. What economic development can we speak of in a region where 15,000 people were left, where ethnic cleansing was carried out?" Temur Yakobashvili said. "This is clearly a provocation."

Russia and Georgia fought a five-day war last August, which began when Georgian forces attacked South Ossetia in a bid to bring it back under central control.

Five of the six parties to the Nabucco gas pipeline project signed on Monday an intergovernmental agreement on the transit of Caspian gas to Europe, skirting Russia. Turkey, Austria, Bulgaria, Romania and Hungary signed the deal, which did not involve Germany as the pipeline will not be built on its territory.