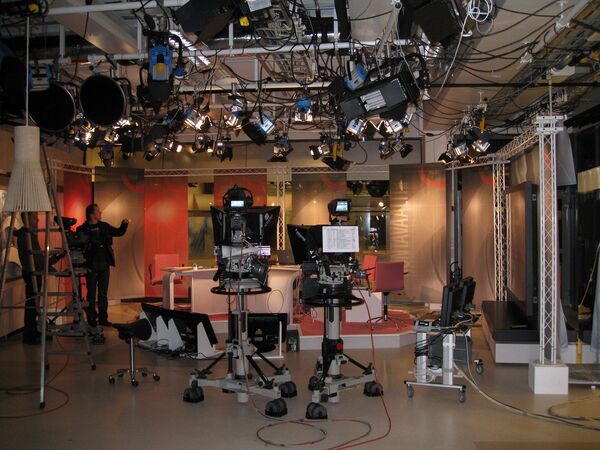 MOSCOW. (RIA Novosti commentator Sergei Varshavchik) - The 2008/2009 TV season that has just concluded can be described as Russian television's search for new formats and directions during a crisis - both financial and creative.

The head of Channel One, Konstantin Ernst, refers to the current situation as the death of analog television, which has existed in its current model for the past 15-20 years. According to Mr. Ernst, its format and communication system have finally outlived their capacity. On the one hand, the Internet has won over the tech-savvy portion of the audience; on the other hand, the onset of digital TV and radio broadcasting is approaching, with the first fiddle likely to be played by the subscribers of a certain major channel, rather than the advertisers.

PricewaterhouseCoopers' survey Global Entertainment and Media Outlook: 2009-2013 holds that the Russian TV advertising market, whose volume totaled $5.5 billion last year, is going to fall into recession this year. According to preliminary forecasts, by 2013 this segment will have grown to only $5.8 billion.

However, a transition to digital television will not begin before 2015. More to the point, a recent decree by Russian President Dmitry Medvedev affirms that the majority of federal channels are not going to exist at the expense of subscribers: Channel One, Rossiya, NTV, Kultura, Sport, Petersburg - Fifth Channel, Vesti-24 and a new channel for children and teenagers, which will be created on the basis of Bibigon and TV Nanny, will be referred to as socially significant. This means that they will be free of charge, existing according to the old model, where the state allots a part of funds, with advertisers providing the rest.

This past TV season differed from the previous ones in that channels attempted to attract spectators with one-off dazzling and impulsive projects, rather than regular programs or TV series.

Channel One again set the tone in the search for new forms in the past season. It broadcast the documentary Mold, whose rating skyrocketed due to an aggressive promotion campaign. Channel One's another knowhow was airing Danny Boyle's Oscar-winning Slumdog Millionaire, which has recently started to be shown in Russian cinema theaters. Leonid Parfyonov's sophisticated documentary The Gogol Bird, dedicated to the 200th birth anniversary of the prominent Russian writer, was another remarkable project, although its rating proved to be relatively low. This does not apply to the highflying Eurovision Song Concert (held in Moscow this year), which went off without a glitch. Channel One once again proved that it is second to none when it comes to broadcasting grandiose entertainment events.

The showing of old black-and-white Soviet movies converted into color in time for Victory-Day celebrations has been in one way remarkable, though public response has remained divisive. As usual, there has been fierce competition between long-standing rivals, Channel One, which colorized Leonid Bykov's best movie "Only Old Men Are Going to Battle," and Rossiya, which responded with Tatyana Lioznova's legendary TV saga "Seventeen Moments of Spring."

Other channels also groped for new ideas during the past season. NTV, which has converted itself into a channel about prisons, cops and people of exotic trades, terminated Vladimir Solovyov's long-standing analytical talk show "To the Barriers" and quite unexpectedly aired two interesting military and historical documentaries: Alexei Pivovarov's film about the Battle of Rzhev and Alexei Pobortsev's film about dramatic events which could lead to the Soviet Union's bringing of troops to Lebanon in the summer of 1982.

Founder of the CTC channel, Alexander Rodnyansky, resigned as CTC Media CEO, stating that he is going to focus his work on movies. Sergei Mayorov, the host of the Stories in Detail program, which received several TEFI prizes, admitted that the channel does not need him as a host any longer, since it is going to reorient itself towards children and teenagers.

However, regardless of the new move toward glitzy TV broadcasting, President Dmitry Medvedev's New Year address, which this time was not recorded in the Kremlin, but outside the Christ the Savior Cathedral, drew the largest audience, as all such addresses do.