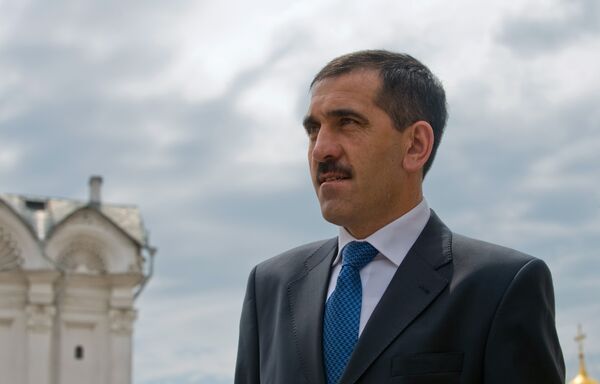 © RIA Novosti . Sergey Guneev
/
Go to the photo bank
Subscribe
The president of Russia's volatile southern republic of Ingushetia remains in a serious but stable condition after injuries sustained in an assassination attempt, a health ministry source said on Tuesday.

MOSCOW, June 23 (RIA Novosti) - The president of Russia's volatile southern republic of Ingushetia remains in a serious but stable condition after injuries sustained in an assassination attempt, a health ministry source said on Tuesday.

Yunus-bek Yevkurov's motorcade was hit by a suspected suicide car bomb on Monday near the city of Nazran. The official received serious injuries to his head, chest and liver, and was airlifted to Moscow after an emergency operation.

"Yevkurov's condition is still grave, but stable and he is not getting worse. The gravity of his condition can be explained by multiple traumas that he received," the source said.

Moscow doctors earlier said his condition was "grave, but not hopeless." On Monday evening he was unconscious and kept in respiratory care. After a blood transfusion his blood pressure rose almost to a normal level.

Russian President Dmitry Medvedev, who visited the Ingush leader at the Vishnyovski Institute of Surgery, called the blast a terrorist attack linked to Yevkoyev's efforts to end a spiral of violence and corruption in the republic.

Yevkurov, a former military intelligence official, became president of the republic last October. In a recent RIA Novosti interview, he said he would offer an amnesty to remaining militants, but pledged to "eliminate" those who would not lay down their weapons.