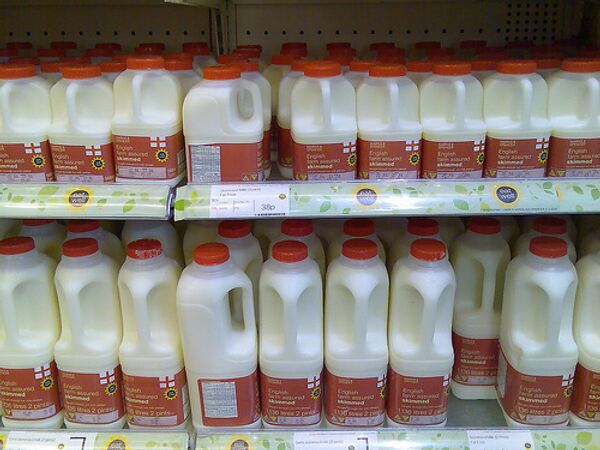 Belarus resumed supplies of its dairy products to Russia on Thursday after Moscow agreed to lift its embargo, the Belarusian agriculture ministry said.

"This became possible after understandings reached at yesterday's Moscow talks," the ministry said.

Belarus briefly imposed tough customs controls on border crossings with Russia on Wednesday, but cancelled them later the same day after Moscow scrapped its ban on Belarusian dairy supplies, which bring the country $1 billion in annual revenue. Moscow claimed Belarus had failed to comply with new regulations despite repeated warnings.

The milk dispute further strained ties between the post Soviet neighbors, who have been trying to establish a "union state." The ban imposed earlier this month sparked a furious reaction in Minsk, which called it "economic discrimination" and boycotted a security summit in Moscow last Sunday in protest.

The Belarusian Agriculture Ministry said it had handed over to Russian authorities a list of companies and products that had received Russian sanitary approval, and would be cleared for exports to Russia. The list will be extended as more producers have their products tested in Russian labs, the ministry said.

"We have now signed a protocol satisfying both the Belarusian and Russian sides," Russia's chief sanitary official, Gennady Onishchenko, told reporters after talks with the agriculture and health ministers of Belarus on Wednesday.

However, a new dispute may loom over Russian gas monopoly Gazprom's demand that Belarus pay its $231 billion debt for natural gas supplies by June 23.

The debt accumulated due to Belarus's payment of the so-called average annual price of $100 per 1,000 cu m of gas, which differed from the contract price of $250 per 1,000 cu m for the first six months of the year.

Energy prices have been an irritant in Russia-Belarus relations in recent years since Moscow began moving away from heavily subsidized gas prices for Minsk. Belarus is a transit nation, along with Ukraine, for Russian gas exports to Europe.