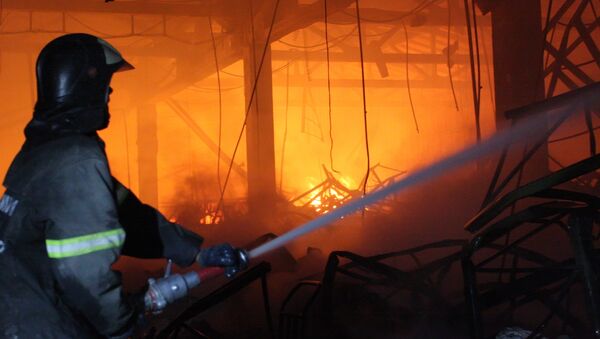 The death toll from a fire that swept through a nursery in north-west Mexico has risen to 41, a local health minister said.

MEXICO CITY, June 8 (RIA Novosti) - The death toll from a fire that swept through a nursery in north-west Mexico has risen to 41, a local health minister said.

The tragedy occurred on Friday in the city of Hermosillo in Sonora state when a blaze broke out in a tire depot next to the daycare center. The fire appears to have been caused by a short circuit.

Many children died from smoke inhalation before rescuers could reach them, as the blaze blocked the nursery's doorway. The age of the victims ranged from a few months to about 3 years old.

Over 140 children were inside the center at the time of the accident. Firefighters had to punch holes in the walls of the nursery's building during the rescue operation.

UPI reported that the desperate parents rammed their cars into the building to free their children. Witnesses said one of the fathers broke down the walls with his pickup.

"The dad of one of the kids broke down one of the walls with his car driving in reverse, and that helped us a bit," an unidentified witness was quoted as saying.

Mexican President Felipe Calderon ordered an investigation into the fire to find those responsible.

The tragedy has shocked the whole country, raising the issue of building safety.