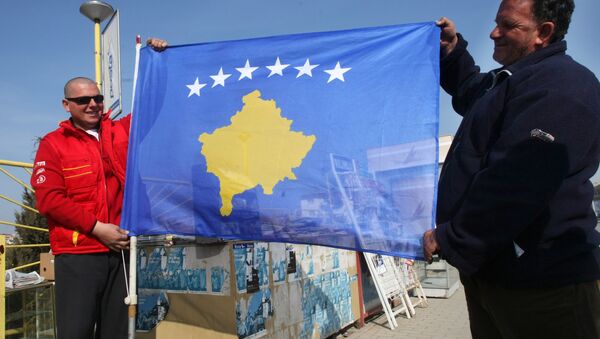 © Sputnik / Iliya Pitalev
/
Go to the photo bank
Subscribe
Russia should recognize the independence of Kosovo and persuade Belgrade to abandon plans to use force, a Kosovo deputy prime minister said on Tuesday.

PRISTINA, April 28 (RIA Novosti) - Russia should recognize the independence of Kosovo and persuade Belgrade to abandon plans to use force, a Kosovo deputy prime minister said on Tuesday.

Last week, Belgrade and Pristina began sparring at the International Court of Justice over Kosovo's unilateral declaration of independence, proclaimed in February 2008. On April 17, both countries officially submitted motions to the ICJ.

"Russia can do two things: Exert pressure on Belgrade and persuade it not to use force [against Kosovo], and recognize the independence of Kosovo," Hajredin Kuci said at a news conference with Ukrainian, Russian, Belarusian and Moldovan reporters in Pristina.

He said Kosovo viewed Russia as a friendly state.

Asked about the prospects for Kosovo's recognition by other post-Soviet states, in particular Ukraine, he said Russia's influence in the region was very strong.

Responding to the question whether Pristina was considering the possibility of joining Albania, Kuci stressed that Kosovo's constitution does not permit accession to any other states.

Belgrade has argued that Kosovo's independence was "unlawful."

There is no deadline for the ICJ to hand down a ruling, which will be nonbinding.