October 1917: Lenin versus Marxism, the Bolsheviks and the Soviets. Part One 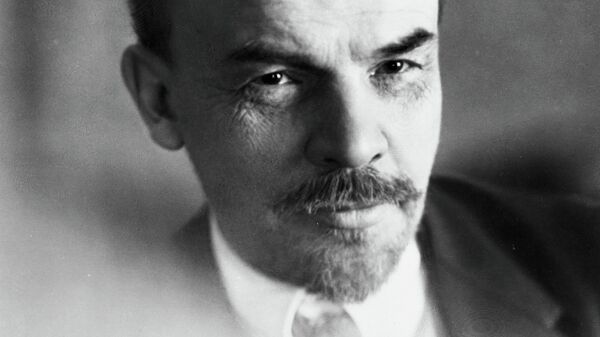 On November 7, 2007, Russia will mark the 90th anniversary of the so-called Great October Socialist Revolution, which is no longer an official holiday.

MOSCOW. (RIA Novosti political commentator Pyotr Romanov) - On November 7, 2007, Russia will mark the 90th anniversary of the so-called Great October Socialist Revolution, which is no longer an official holiday.

So, now it is high time to recall the real, not mythical, history of that immensely interesting period.

Paradoxical as it may sound, Vladimir Lenin had to overcome Marxism and the resistance of the Bolshevik Party and the Soviets (Councils) of Workers', Peasants' and Soldiers' Deputies before he was able to launch the well-known October 25, 1917 attack against the Provisional Government entrenched in the Winter Palace.

Lenin had travelled to Russia by railway inside a sealed carriage via Germany and began this struggle right after returning home in April 1917. Judging by memoirs, Lenin's arrival at the Finland railroad station in Petrograd (now St. Petersburg) featured several interesting episodes.

First, Lenin, who spoke from the top of an armored car, made a sensational statement that a worldwide socialist revolution was already underway, that Germany was in turmoil, and soon other nations as well would start fighting their oppressors at the call of Comrade Karl Liebknecht. Moreover, it turned out that all those welcoming Lenin were the "advance detachment of the global proletarian army".

Second, everyone at the station was surprised to see that Lenin had red hair and was waving a typically bourgeois bowler hat. Some Bolshevik spin-doctor promptly realized that a modest proletarian cap was more appropriate in this crowd of workers, soldiers and sailors. From then on, Lenin would always wear this cap, which became his trademark.

However, some people who repeatedly heard Lenin's defeatist speeches that day did not like them and said the red-headed man should be bayoneted.

The more prepared members of the Russian Social-Democrat Workers Party, namely, the Bolsheviks and the Mensheviks, and Socialist Revolutionaries (SRs) reacted no less emotionally. Nikolai Sukhanov, Member of the Executive Committee of the Soviets, said Lenin's first speech did not conform to the entire "context" of the Russian revolution as perceived by all its witnesses and participants.

According to Sukhanov, Lenin had not asked anyone's advice and made statements that were a far cry from the national situation. Although the context of the revolution implied above all national interests, Lenin started talking inadvertently about Karl Liebknecht, Germany and the European proletariat.

In short, Lenin and Russia did not accept each other after a long separation, nor did the Bolshevik Party willingly accept its emigre leader.

Well, this is hardly surprising because most Russian revolutionaries had learned from Karl Marx, Friedrich Engels and Western socialists, and shared their opinion of how the revolution should proceed. They believed that an initial bourgeois-democratic revolution would lead to greater democratic freedoms, as well as the development of capitalism and proletariat. After that, it would become possible to start introducing socialist reforms.

Most Social Democrats and the SRs considered the vastly superior Russian peasantry to be an inert and unreliable mass that could even betray the cause of socialism. In their opinion, the situation could not be changed overnight.

This is why the well-educated Social Democrat Georgy Plekhanov, who knew all about Marxism, called Lenin's first speech in Petrograd crazy. According to Plekhanov, "capitalism must grind the peasant grain into proletarian flour, which could be used to bake a proletarian loaf" in the future.

In fact, Marx and Engels had strongly advocated this concept. In his "Peasant War in Germany" and a letter to journalist, politician and revolutionary Joseph Weydemeyer, Engels wrote that it was dangerous for revolutionaries to go too far too soon.

Plekhanov believed Russia should copy European development. This is why the Soviets were so tolerant of the Provisional Government and those few capitalist ministers who remained by October 1917.

Russia's Social Democrats and the SRs were preparing for parliamentary battles, rather than an armed power struggle. They were confident that given the free will of the people, they would easily win the majority at the future elections to the Constituent Assembly. In theory, they voluntarily recognized the bourgeoisie as the leader of the Russian revolution, but believed that it should also think about the interests of others.

The Bolsheviks mostly agreed with this concept until Lenin forced them to change their mind. However, Lenin lost the first indirect clash with the "opportunist" Bolsheviks.

Lev Kamenev and Josef Stalin, who had returned to Russia from exile by March 1917, established control over the moderate Pravda newspaper, the Bolshevik party's mouthpiece.

The editorial board received some of Lenin's articles called "Letters from Afar" while he was still abroad but considered them to be utopian because they exhorted the working people to arm themselves and to promptly stage a socialist revolution. They explained this by the fact that the Bolshevik leader had spent too much time outside Russia.

Although the first of the five "Letters" was published in an abridged form, the second one was placed in the Pravda archive. It appears that the newspaper did not receive the other four letters, but one can speculate that Kamenev would never have allowed them to be published. Stalin, who was not much of a theoretician in early 1917, sided with Kamenev, who, in turn, supported Plekhanov to a greater extent than Lenin.

Whereas Kamenev and other Bolshevik leaders considered Lenin a radical utopist who had become alienated from his home country, the latter believed that his old friends were nothing but backward provincials. He believed that the "Old Bolsheviks" had missed a chance to gain power in February 1917 and to carry out a proletarian socialist revolution, and that they held on to hopelessly outdated ideas after the abdication of Tsar Nicholas II. Lenin brought with him the newest foreign ideas and recipes, which amounted to Marxism-Leninism, rather than classic Marxism.

Political stakes were upped overnight. A bourgeois-democratic government controlled by Social Democrats was no longer the order of the day. On the contrary, Lenin began to talk about an all-out social explosion that would shake the pillars of society and would usher in a world socialist revolution.

In his famous April Theses, the Bolshevik leader stressed that time was ripe for a revolutionary coup, that Russia was the freest belligerent country in the world, and that the masses were not subjected to any violence.

Lenin therefore advocated a second revolution in the next three months, so that the Bolsheviks could gain power, and said it was essential to provoke a world revolution because this was the only way to retain power.

However, the April Theses said nothing about building a proletarian state and socialism. Lenin believed that the Bolsheviks must give priority to a revolutionary coup, retain power, become involved in the world revolution, establish a new militant Communist International and abolish the old bourgeois state system. Unlike the detailed SR draft agricultural program, Lenin's April Theses merely pointed out the need to rely in the villages on the poorest rural proletarians, namely, seasonal workers.

Lenin's platform stipulated no specific constructive tasks and said an upcoming party congress must discuss the Bolsheviks' attitude towards the state and demand for a "commune state," based on the ill-fated 1871 Paris Commune. Such was his main blueprint for a future Russia.

The Bolsheviks became divided on Lenin's April Theses. Historian Robert Schlesser wrote that Lenin's statement concerning the proletariat's alleged mistake in February 1917 contradicted the Marxist dictum that objective conditions were required for carrying out a proletarian revolution. Worst of all, Lenin's theories unexpectedly came to resemble those of outcast Lev Trotsky, who was mostly accused of adventurism and a reluctance to consider objective pre-conditions.

According to Schlesser, Trotsky's permanent-revolution theory envisioned a rather intricate mechanism for overcoming this seemingly insurmountable historical law. Trotsky believed that Russian workers' actions could lead to successive revolutions that would quickly engulf Western industrial capitalist nations. After that, European workers would become powerful allies of Russia's small but militant proletariat.

Lenin, who did not recognize his intellectual debt to Trotsky, put forward a remarkably similar uninterrupted-revolution theory.

Far from all Bolsheviks were ready to immediately and unequivocally accept the new drastic line. Pravda, which published Lenin's April Theses, said the opinions expressed in them were the author's and did not necessarily represent those of the editorial office.

Moreover, the editorial office openly distanced itself from Lenin and called his general concept unacceptable because the Bolshevik leader considered the bourgeois-democratic revolution complete and hoped that it would be immediately followed by a socialist revolution.

It was easier to convince rank-and-file Bolsheviks who lacked theoretical training but who were used to obeying orders. But Lenin's friends, members of the Party's Central Committee, were his main problem. Although they respected Lenin, they were independent-minded, and many of them were considered to be major socialist theoreticians. They were in no mood to bow to Lenin.

In his "History of the Russian Revolution," Trotsky provided a detailed insight into the Bolshevik power struggle after Lenin's return. This book presents a far more authentic story of preparations for the October 1917 coup than all other numerous works on the same subject that were published from 1924, when Stalin was elected General Secretary of the Central Committee of the Russian Communist Party (Bolsheviks), to 1985, when the last Soviet leader Mikhail Gorbachev launched his perestroika.

Trotsky, a rather cynical man, gloated over partisan squabbles. This is understandable because, although Trotsky was the Bolshevik Party's prodigal son under Lenin and Stalin, he sided with Lenin at a crucial moment and was considered the best Bolshevik by him.

Lenin's April Theses triggered a lively discussion. Felix Dzerzhinsky, the founder of the dreaded All-Russian Special Commission for Combating Counter-Revolution and Sabotage (Cheka), the forerunner of Soviet secret police, demanded on behalf of the many people who completely disagreed with Lenin to hear a supplementary report by practical revolutionaries.

Mikhail Kalinin, the future Chairman of the Presidium of the USSR Supreme Soviet (Parliament), was surprised by Lenin's statement that the Old Bolsheviks had become an obstacle to the revolution. Lev Kamenev, who was to become the first Chairman of the All-Russian Central Executive Committee, an early post-revolution Parliament, treated Lenin as a capable student, who had missed the most important lessons. Kamenev repeatedly told Lenin that an immediate proletarian revolution in Russia was impossible due to the lack of some objective pre-conditions as set forth by Marx.

Future Red Army commander and Civil War hero Mikhail Frunze also opposed Lenin and his teachings. Some memoirs imply that a number of Bolsheviks claimed behind the scene that Lenin had lost his mind abroad and was pushing the party toward an abyss.

Alexander Shlyapnikov, Member of the Bolshevik Party's Central Committee, later recalled that all-out discord had spread among his colleagues.

(The continuation of this article will be posted soon.)