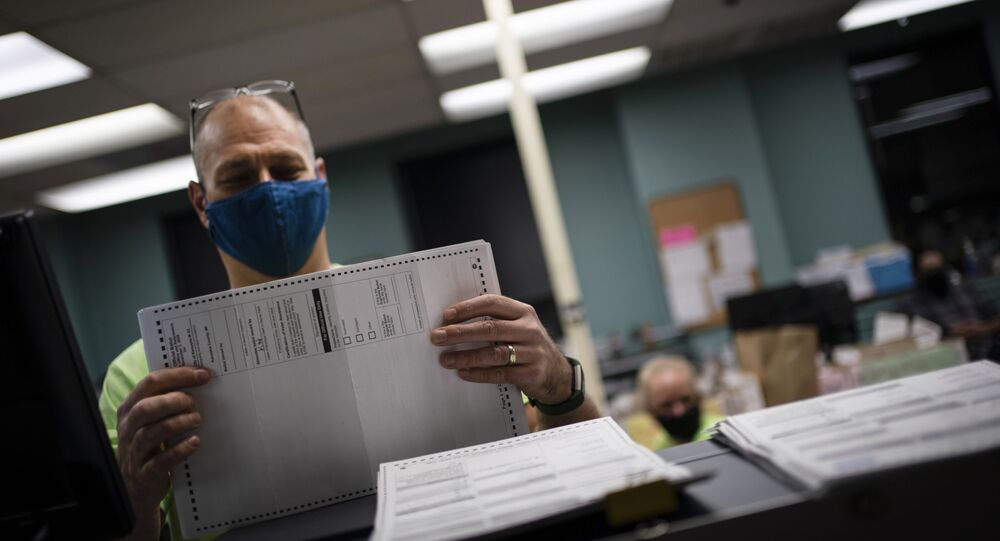 WASHINGTON (Sputnik) - US President Donald Trump and his Democratic rival Joe Biden both said they were winning the election despite half a dozen of states still counting votes with some results unlikely to be known until the end of the week.

State Of The Race

Trump trails Biden in electoral and popular votes but seems to be ahead in five out of six remaining states - enough to overtake him. Fox News estimates that Biden has secured 238 electoral votes out of 270 needed to win the US presidency compared to Trump's 213. Reuters and CNN assess Biden's lead at 220 to 213.

Apart from predictable wins in their respective parties' strongholds, like California and New York for the Democrats, Tennessee and Alabama for the Republicans, each of them acquired valuable contested assets. Biden surprisingly won in Arizona, while Trump claimed far more coveted Texas, Florida and Ohio.

The showdown now comes down to Pennsylvania, Michigan and Wisconsin, the so-called Rust Belt of America's Midwest with a cumulative worth of 46 electoral votes. North Carolina and Georgia, along the Atlantic shore, carry another 31. A six-vote Nevada is the only up for grabs state where Biden seems to be in the lead.

Overall results are significantly better for Trump than most polls projected before the election when he was portrayed as an underdog of the campaign.

In Pennsylvania, Trump is ahead by 12 points with 64 percent of votes counted.

© AP Photo / Wong Maye-E
People wearing pullovers with the words "Count Every Vote" dance as they monitor election results off the television at a watch party on Tuesday, Nov. 3, 2020, in Kenosha, Wis.

In the first public appearance after the voting, Trump called his performance phenomenal.

"We didn't win it, we won it by a lot," Trump announced at the White House.

The move drew criticism from several in the media who said it was wrong to prematurely declare victory.

The president, however, accused his opponents of plotting "a major fraud on our nation" and promised to ask the Supreme Court to ensure the integrity of the election and prevent any ballots from coming after polling stations are closed.

"We will be going to the US Supreme Court. We want all voting to stop. We don't want them to find any ballots at 4 o'clock in the morning and add them to the list," Trump said.

He was referring apparently to mail-in ballots which in states like Pennsylvania are expected to pour in for several more days.

His similar post on Twitter was swiftly flagged by the social media platform as disputed and potentially misleading.

However, Biden expressed certainty in his victory as well.

"Keep the faith, guys. We are going to win this," he told his supporters.

The Democratic challenger warned that it may take until morning or even longer for the outcome of the election to transpire.

Pennsylvania, for example, expects up to three million mail-in ballots and allows them to be received within three days of polls closing. Local officials predict the count will continue until Friday. The Republican Party and Trump have said the practice of mailing in ballots and extending deadlines may result in vote harvesting and electoral fraud.

Michigan officials said they expected to have results within the next 24 hours. Wisconsin planned to have results by 6:00 a.m. EST (11:00 a.m. GMT). In Georgia, officials predict that results will be available one or two days. North Carolina plans to count mailed ballots until November 12.