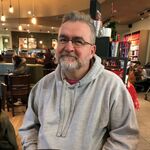 Jon Gaunt has been working in broadcasting for over 25 years and has worked on a variety of platforms and won many awards including three Sony Awards.

He has worked for BBC London and had over a million listeners when he was the mid-morning presenter on talkSport for three years.

Jon had his own full-page column in The Sun newspaper for over five years with a readership of 8 million.

He started his own podcast three years ago and built it into a live radio station with over 60,000 weekly listeners and millions of downloads.

He is a published author with two books with Virgin/Random books.

He is also a successful TV and theatre writer who won a Fringe First for his play Hooligans and was a member of The Emmerdale writing team.