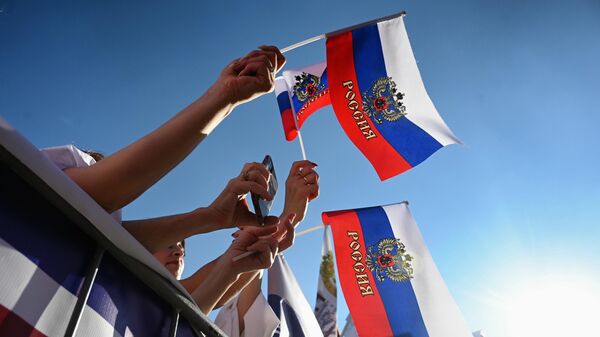 Subscribe
International
India
Africa
Being updated
In February, Russia launched a military operation in Ukraine after Kiev intensified attacks on the people's republics of Donetsk and Lugansk. President Vladimir Putin stressed that Moscow aimed to stop the eight-year-long war being waged by Ukraine against the people of Donbass.
Russia has been targeting Ukrainian infrastructure with precision strikes since October 10, as a response to Kiev's terrorist attack against the Crimean Bridge.
The strikes are aimed at power, defense industry, military command and energy infrastructure facilities throughout Ukraine. Since then, air raid alerts have been sounded in Ukrainian regions every day, sometimes all through the country. As a result, Ukraine is experiencing massive power cuts.
Follow Sputnik's Live Feed to Find Out More!
Table of contents
New firstOld first
13:14 GMT 02.12.2022
Ukrainian Consulate in Czech Brno Evacuated After Receiving Suspicious Package
Employees of the Ukrainian consulate in the Czech city of Brno were quickly evacuated from the consulate premises on Friday after receiving a suspicious package, Police spokesman David Chaloupka said.

"We are talking about a suspicious object, an investigation into what it could be is being carried out on the ground. Six employees were evacuated from the consulate building. People from a number of neighboring buildings including a kindergarten were also evacuated," the spokesman told journalists.

Chaloupka added that the package delivered to the consulate was similar to the one that had been identified in the Ukrainian embassy in Madrid earlier in the week.
12:54 GMT 02.12.2022
Moscow Lambasts France for Idea of 'Tribunal' Against Russia Amid Special Op in Ukraine
Moscow is appalled at Paris' plans regarding the creation of a "special tribunal for crimes by Russia," the Russian Foreign Ministry said on Friday, adding that it will have nothing to do with justice.

"We are outraged by the statement of the French Ministry for Europe and Foreign Affairs regarding the plans to create some kind of a 'special tribunal for the crimes of Russian aggression.' In addition to trying to involve the International Criminal Court, western countries decided to promote the idea of creating another overtly politicized 'judicial' instance, which, in fact, has nothing to do with justice," the ministry said in a statement.

"The question is how to help Ukraine... One proposal says that we should use the budgets of the EU member states to take out new loans together and use that money to give to Ukraine. We are not in favor of this because we do not want the European Union to become a community of indebted states instead of a community of cooperating member states", Orban noted

The politician noted that each of the EU's 27 member states should use its own budget to provide assistance to Kiev via bilateral deals, if they want to do so.

"We will not accept the other plan, we will not consent to it, without us it will not come into being", he added.

"But the Americans dismiss all this, they say that this is disinformation from the Russian side… They say that they are honest and noble humanitarians," the diplomat said.

The envoy noted that at the current session of the OPCW member countries, the Russian side provided information about "contractors who help Ukrainian nationalists in these chemical preparations." According to Shulgin, the contract workers in question are from Nevada.
10:14 GMT 02.12.2022
Non-Recognition of New Russian Territories by US Impedes Dialogue, Kremlin Says
The United States still does not recognize the new territories of Russia, which significantly complicates the search for mutual ground for discussions, Kremlin spokesman Dmitry Peskov said on Friday.

"The United States still does not recognize the new territories as part of Russia. And, of course, this significantly complicates the search for some kind of mutual ground," Peskov told a briefing.

On Thursday, US President Joe Biden said earlier that he does not plan holding contacts with Russian President Vladimir Putin in the near future, but is open to such a possibility if the Russian president "shows interest" in ending the conflict in Ukraine.
09:55 GMT 02.12.2022
Kremlin on Uniper Lawsuit: Gazprom Will Defend Interests by All Available Means
Russian energy giant Gazprom will defend its interests by all available means, primarily legal ones, Kremlin spokesman Dmitry Peskov said on Friday, commenting on a lawsuit filed by Germany's largest gas importer Uniper.

"Well, of course, by all available means, legal, and above all, our company will defend its interests," Peskov told reporters when asked about Russia's response to possible new lawsuits.

On Wednesday, Uniper announced that it is initiating arbitration proceedings against Gazprom Export over damages due to undelivered gas.
08:12 GMT 02.12.2022
MoD Says Russian Aerospace Forces Launch New Anti-Ballistic Missile Defense System - Video
07:22 GMT 02.12.2022
Biden Wants to Avoid Expanding Conflict in Ukraine, Not Seeking War With Russia - Blinken
US President Joe Biden wants to avoid expanding the conflict in Ukraine, as the US does not want a war with Russia, US Secretary of State Antony Blinken said on Friday.
In an interview with the France 2 broadcaster, the US official said that Washington would not determine the terms of negotiations with Russia for Kiev, but would support any decision of the Ukrainians.
04:52 GMT 02.12.2022
Ukraine Hits LPR With HIMARS Strikes
Newsfeed
0
Access to the chat has been blocked for violating the rules . You will be able to participate again through:∞. If you do not agree with the blocking, please use the feedback form
The discussion is closed. You can participate in the discussion within 24 hours after the publication of the article.
To participate in the discussion
log in or register
loader
Chats
Заголовок открываемого материала