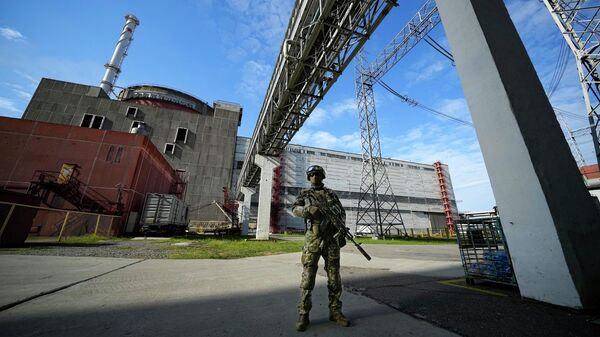 Subscribe
International
India
Africa
Being updated
Russia launched its special military operation in Ukraine on February 24, after the Donetsk and Lugansk People’s republics appealed for help in defending themselves against Ukrainian provocations. Western countries have increased sanctions pressure on Russia since the start of the special operation in Ukraine.
Precision strikes against Ukrainian infrastructure have been carried out by Russia since October 10, after the terrorist attack on the Crimean Bridge, which, Moscow believes, was plotted and carried out by Kiev.
On November 1, Ukrainian President Volodymyr Zelensky said that about 40% of Ukraine's energy infrastructure had been damaged as a result of these strikes, leading to mass blackouts throughout the country.
Follow Sputnik's Live Feed to Find Out More!
Table of contents
New firstOld first
18:35 GMT 20.11.2022

Zelensky Manipulating Washington Into Actions Against US Interests, Top DC CIA-Linked Observer Says
16:31 GMT 20.11.2022
Macron, IAEA Chief Discuss Situation at Zaporozhye NPP Amid Shelling on Sunday
French President Emmanuel Macron had a telephone conversation with the head of the International Atomic Energy Agency (IAEA), Rafael Grossi, after reports of shelling at the Zaporozhye nuclear power plant (NPP), French broadcaster reported on Sunday, citing the Elysee Palace.
Renat Karchaa, adviser to the head of Rosenergoatom, a subsidiary of Russian state nuclear energy corporation Rosatom, told Sputnik earlier in the day that Ukrainian troops subjected the Zaporozhye NPP to massive artillery shelling, damaging strategic facilities.
Macron also intends to call Ukrainian President Volodymyr Zelensky later in the day, the report said.
The Zaporozhye NPP is the largest nuclear power plant in Europe by number of units and output. During the military operation in Ukraine, launched by Russia on February 24, the nuclear plant and surrounding area went under the control of Russian forces and have since been shelled many times.
According to IAEA experts, several buildings, systems and equipment have been destroyed at the Zaporozhye NPP. Grossi called on the leadership of Russia and Ukraine to negotiate and introduce a nuclear safety zone around the plant.
14:57 GMT 20.11.2022
First New Zealand Government Minister Visits Ukraine Since February 24
New Zealand's Defense Minister Peeni Henare paid a visit to Kiev, becoming the first government minister of the island nation to visit Ukraine since the start of Russia’s special operation, Ukrainian Defense Minister Oleksii Reznikov said on Sunday.
"I was glad to welcome my [New Zealand] colleague @PeeniHenare in Kyiv," Reznikov tweeted.
According to the 1News broadcaster, Henare held a bilateral meeting with his Ukrainian counterpart in Kiev and visited the nearby city of Irpin.
"Visiting Kyiv sends a strong message that New Zealand stands with the people of Ukraine and that our support for the Ukrainian defensive effort… is unwavering," Henare was quoted as saying by the broadcaster.
Last Monday, New Zealand said it would extend its mission to the United Kingdom to train Ukrainian troops through July 2023 but would cut its personnel by almost a half. Foreign Minister Nanaia Mahuta said the government had agreed to continue providing financial aid to Ukraine.
However, Henare also flagged that Kiev's demands for military support, including HIMARS, land-to-air and land-to-sea systems, do not match New Zealand's current stockpile.
14:56 GMT 20.11.2022

France has already supplied Ukraine with 18 self-propelled 155-mm caliber artillery units Caesar from the army's reserves. In September, French media reported that France would also supply Ukraine with self-propelled 155-mm guns TRF1, which are no longer used by the French military. In addition, President Emmanuel Macron announced in October that France is working with Denmark on supplying Ukraine with six more Caesar howitzers.
12:20 GMT 20.11.2022
Russia's MoD Briefing on Progress of Special Military Operation in Ukraine
10:59 GMT 20.11.2022
Kiev Continues Provocations to Create Threat of Man-Made Disaster at ZNPP, Russian MoD Says
The radiation level around the Zaporozhye nuclear power plant (NPP) remains normal, the Russian Defense Ministry said.
07:20 GMT 20.11.2022
Air Raid Warnings Issued Across Ukraine - Authorities
04:33 GMT 20.11.2022
Ukrainian Forces Shell Donetsk Republic Using HIMARS Missiles - DPR
Newsfeed
0
Access to the chat has been blocked for violating the rules . You will be able to participate again through:∞. If you do not agree with the blocking, please use the feedback form
The discussion is closed. You can participate in the discussion within 24 hours after the publication of the article.
To participate in the discussion
log in or register
loader
Chats
Заголовок открываемого материала