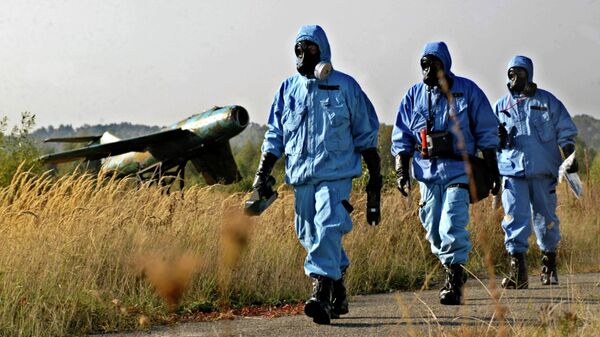 Russia launched a special military operation in Ukraine in February in response to calls by the Donetsk and Lugansk People's Republics for protection from Ukrainian forces.
On Sunday, Russia's Defense Minister Sergei Shoigu told President Vladimir Putin that the Lugansk People's Republic had been entirely liberated as Ukrainian armed forces retreated from the strategic city of Lisichansk and a number of nearby settlements.
However, Ukrainian forces continue shelling Donbass cities, which results in civilian casualties.
Follow Sputnik's live feed and Telegram channels to get the latest updates:
Sputnik News US — https://t.me/sputniknewsus
Sputnik News India — https://t.me/sputniknewsindia
Table of contents
New firstOld first
02:19 GMT 07.07.2022
Transit point of Ukrainian saboteurs and weapons cache found in Kherson region
01:08 GMT 07.07.2022
Over 24,000 People Evacuated From Ukraine, Donbas to Russia in Past Day - Defense Ministry
Over 24,000 people have been evacuated to Russia over the past 24 hours from dangerous areas of the Donetsk and Lugansk People's Republics (DPR and LPR) and Ukraine, head of the Russian National Defense Control Center, Col. Gen. Mikhail Mizintsev, who also leads Russia's humanitarian response coordination headquarters, said.
"Over the past day, without participation of the Ukrainian side, 24,068 people, including 3,726 children, were evacuated to the territory of the Russian Federation from dangerous areas of Ukraine and the Donbas republics," Col. Gen. Mizintsev said at a briefing.
He added that since the start of Russia's special military operation, more than 2.35 million people, including over 371,000 children, have been evacuated to Russia..
00:37 GMT 07.07.2022
FCS reported almost constant shelling of checkpoints on the border with Ukraine
19:32 GMT 06.07.2022
Russian Village in Bryansk Region Shelled From Ukraine - Governor
The Nekislitsa village in Russia's Bryansk region was shelled from the Ukrainian side on Wednesday, Governor Alexander Bogomaz said.

"This evening, Ukraine fired artillery at the border village of Nekislitsa, Sevsky district," Bogomaz wrote on his Telegram channel, adding that the incident did not lead to any casualties.
18:36 GMT 06.07.2022
Ukraine's Economic Adviser Expects Recession at 40%
Oleg Ustenko, the Ukrainian president's economic adviser, said on Wednesday that he expects the economic recession of his country to be at 40% by the end of the year.
"I would estimate the economic recession this year at the level of at least 35%, but in general I believe that it will be at the level of 40%," Ustenko said, as broadcast by Ukraine 24 TV channel.
Earlier, Ukrainian Prime Minister Denys Shmyhal estimated that the fall in GDP will be at least 35%.
The EU has disbursed 6.2 billion euros ($6.5 billion) in financial assistance to Ukraine and is committed to helping Ukraine in the medium and long term, according to the leaders present at the Ukraine reconstruction conference in Switzerland. Shmyhal said it would cost an estimated $750 billion to rebuild his country.
17:54 GMT 06.07.2022
Ukrainian Foreign Minister to Participate at G20 Ministerial Meeting Online
Ukrainian Foreign Minister Dmytro Kuleba will give a virtual speech at the G20 foreign ministers' meeting, which will be held from July 7-8 on the Indonesian island of Bali, Ukrainian ambassador to Indonesia Vasily Gamyanin said on Wednesday.
"Dmytro Kuleba, foreign minister of Ukraine, will take part in the second part of the ministerial meeting in Bali virtually. He will address the participants with a virtual speech that will not be recorded in advance, it will be delivered live," the ambassador told reporters, as quoted by Indonesian broadcaster SCTV.
17:47 GMT 06.07.2022
Ukraine Transitions Third Power Plant to Westinghouse Nuclear Fuel, Regulator Says
Ukraine continues to transition its nuclear power plants to work on American fissile materials, provided by Westinghouse company, the most recent plant being the Rovno Nuclear Power Plant, the State Nuclear Regulatory Inspectorate of Ukraine said on Wednesday.
"At the Rivne Nuclear Power Plant fuel assemblies from the American company Westinghouse are loaded into the reactor core of Unit 3... Power unit № 3 of the Rivne Nuclear Power Plant is already the seventh out of thirteen Ukrainian nuclear reactors of the WWER–1000 type [water-water energetic reactor], which use fuel assemblies from Westinghouse," the regulator said.
As part of the nuclear fuel diversification program, Ukraine has been operating on Westinghouse fuel assemblies for WWER-1000 reactors since 2015.
In April, the Ukrainian state nuclear energy generating enterprise Energoatom stated that the country has completely abandoned Russian nuclear fuel.
16:18 GMT 06.07.2022
UN, EC at High Level Dialogue to Discuss Ukraine Conflict's Global Impact
The United Nations and the European Commission will hold their first high-level dialogue at the Greentree Foundation in New York this week where they will discuss Ukraine as one of the key world's challenges, UN Spokesman Stephane Dujarric said Wednesday.
"Throughout several sessions, participants will discuss a number of key challenges facing the international community and how these can best be addressed to increase multilateral cooperation," Dujurraic said in a briefing. "The delegations will also discuss the war in Ukraine and its global consequences, including efforts to alleviate the impact, especially on the most vulnerable of the food, energy, and finance sectors."
The two-day dialogue, which starts on Thursday, will be co-chaired by UN Secretary-General Antonio Guterres and European Commission President Ursula von der Leyen, the spokesman added. The participants will discuss boosting multilateral cooperation, security, climate, human rights, among other issues, Dujarric said.
15:33 GMT 06.07.2022
US Lawmaker Urges Biden, Zelenskyy to ‘Stop Playing Politics’ in Ukraine
Ukraine-born US Congresswoman Victoria Spartz on Wednesday urged US President Joe Biden and Ukraine President Volodymyr Zelensky to “stop playing politics” with people’s lives in Ukraine amid Russia’s special military operation in the country.
“[P]resident Biden has to stop playing politics, have a clear strategy and align security assistance with our strategy; President Zelensky has to stop playing politics and theater, and start governing to better support his military and local governments,” Spartz said in a statement.
The congresswoman also urged the US Congress to establish “proper oversight of critical infrastructure and delivery of weapons and aid” to Ukraine, the statement said.
Spartz was born and raised in Ukraine and lived nearly 22 years in the country. She immigrated to the United States in 2000 and now serves as a representative of the state of Indiana’s 5th congressional district since 2021.
11:50 GMT 06.07.2022
Russia Warns OPCW of Possible Provocations by Ukraine With Chemical Weapons in DPR, Envoy Says
Moscow has sent a note verbale to the Organisation for the Prohibition of Chemical Weapons (OPCW) saying that Kiev is preparing a staged provocation with the use of chemical weapons at Slavyanskaya thermal power plant in the Donetsk People's Republic (DPR), also warning about other possible provocations in Nikolaev and Kharkov, the Russian permanent representative to the organization, Alexander Shulgin, said on Wednesday.

"We have already sent a corresponding note to the technical [OPCW] secretariat, informed about the upcoming provocations in Nikolaevka, also notified that Ukrainian nationalists are going to organize provocations in other places such as in Nikolaev and Kharkov. In total, over two dozen notes have already been sent to the technical secretariat," Shulgin told the Russian Rossiya 24 broadcaster.

The official also said that the OPCW confirmed the receipt of the data, and that the organization has been distributing it among the participating countries.

On Tuesday, the head of the Russian National Defense Control Center, Col. Gen. Mikhail Mizintsev, said that Kiev was preparing a staged provocation in the DPR with a use of chlorine to accuse Moscow of alleged indiscriminate attacks targeting chemically hazardous objects.
10:15 GMT 06.07.2022
Sweden Has No Precise Data on Detention of Its National in DPR - Foreign Ministry
Stockholm has not yet received any clear information on the detention and indictment of a Swedish citizen in the Donetsk People's Republic (DPR), who participated in the conflict in Ukraine, the Swedish Ministry for Foreign Affairs told Sputnik on Wednesday.

"The foreign ministry is aware of media reports about the detention and filed charges against the Swedish citizen over participation in hostilities in Ukraine. To date, we have no information on whether these reports are precise," the ministry said.

Earlier this week, the DPR pressed charges against the Swedish national who surrendered at the Azovstal plant in Mariupol over participation in the hostilities as a mercenary on the Ukrainian side.
09:08 GMT 06.07.2022
Russia Destroys Two HIMARS Launchers Supplied to Ukraine By US, Two Ammunition Depots Near Malotaranivka in DPR, MoD Says
The Russian aerospace forces have destroyed the HIMARS multiple launch rocket systems, which the United States has supplied to Ukraine, in the Donetsk People's Republic (DPR), the Russian Defense Ministry said on Wednesday.

"High-precision air-launched missiles have destroyed two US-made HIMARS multiple rocket launchers and two ammunition depots for them in the area of ​​the village of Malotaranivka in the Donetsk People's Republic," the ministry told reporters.
08:23 GMT 06.07.2022
Ukraine Initiates Denunciation of Treaty on Educational Documents Recognition With Russia
Ukraine has initiated the denunciation of an agreement on the recognition of educational documents with Russia, while other countries have not followed the suit, the Russian Ministry of Education and Science told Sputnik.

"The Ukrainian side has initiated the denunciation of the agreement between the Russian government and the Ukrainian cabinet of ministers on mutual recognition and equivalence of documents on education and academic titles dated May 26, 2000," a statement read.

In accordance with the agreement, the document is terminated after 6 months from the date when one of the parties receives a written notification of such intention from the other party.

"Until now, the Russian Foreign Ministry has not received a corresponding written notification," the statement added.

Moreover, the Russian ministry of education and science said it had not received information about the intention of other countries to denounce their agreements on the recognition of educational documents with Russia.
08:13 GMT 06.07.2022
Ukrainian Forces Fire More Than 500 Shells at DPR in 24 Hours - People's Militia
Newsfeed
0
Access to the chat has been blocked for violating the rules . You will be able to participate again through:∞. If you do not agree with the blocking, please use the feedback form
The discussion is closed. You can participate in the discussion within 24 hours after the publication of the article.
To participate in the discussion
log in or register
loader
Chats
Заголовок открываемого материала