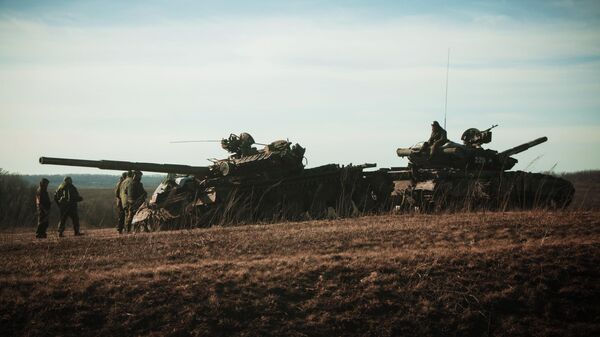 Being updated
In February, Russia launched a military operation in Ukraine after the breakaway people's republics of Donetsk and Lugansk asked for help in defending themselves from attacks by Ukrainian forces.
Russian armed forces and militias from the Donetsk and Lugansk People's Republics (DPR and LPR) continue to advance, pushing Ukrainian forces back from the region.
Recently, the Russian military, during its special operation to demilitarise Ukraine, took control of the Kherson Region - in the south of the country - and part of the Zaporozhye Region.
On Friday, the Russian Defence Ministry said that the steel plant in the southeastern port city of Mariupol had been liberated from Ukrainian troops, ending a month-long standoff. A total 2,439 servicemen have been captured since 16 May.
Follow Sputnik's live feed and Telegram channels to get the latest updates:
Sputnik News US — https://t.me/sputniknewsus
Sputnik News India — https://t.me/sputniknewsindia
New firstOld first
00:16 GMT 26.05.2022
DPR Army Has Entered Kherson, Zaporozhye, Kharkov Regions - DPR Leader Pushilin to Sputnik
20:20 GMT 25.05.2022
US to Keep Sanctions on Russia Even if Ukrainian Ports Unblocked - State Dept.
18:33 GMT 25.05.2022
Russian MoD: ICRC Ceased Delivering Vital Drugs to Donbass
The International Committee of the Red Cross (ICRC) has stopped supplying the Donbass republics with essential medicines under the pretext of the unstable situation in the region, the head of the Russian National Defence Control Centre, Col. Gen. Mikhail Mizintsev, said on Wednesday.

Earlier this week, chief physicians from the self-proclaimed Donbass republics said that the ICRC and the World Health Organisation (WHO) ceased to supply HIV and tuberculosis treatment to local residents. The ICRC then confirmed “disruptions” in the supply of medicines.

"The International Committee of the Red Cross, under the pretext of the allegedly unstable situation in the Donbass, has stopped deliveries of vital drugs and products to the specialised health institutions of the people's republics for the diagnosis and specific treatment of patients with a weakened immune system, chronic infectious and endocrine diseases," Mizintsev told a briefing, adding that over 12,000 people will be left without necessary treatment in the next few months because deliveries of drugs have stopped.

The defence official also called on the WHO and the ICRC to resume regular deliveries of medicines to Donbass.
18:08 GMT 25.05.2022
Ukraine's Foreign Minister: Kiev Has No Preconditions For Resuming Talks With Russia
14:03 GMT 25.05.2022
President Putin Meets Russian Soldiers Who Were Wounded in Ukraine and Currently Undergoing Medical Treatment - Video
13:43 GMT 25.05.2022
Governor of Russia’s Belgorod Region Says One Person Injured After Village Shelled From Ukrainian Side
One person was injured as Ukrainian forces shelled the village of Zhuravlevka in Russia's border region of Belgorod, Governor Vyacheslav Gladkov said on Wednesday.

"There is shelling from the Ukrainian side of our village Zhuravlevka. According to the report of the head of the settlement, Anzhelika Samoilova, five households were damaged. There is one injured - a young man with a deep shrapnel wound," Gladkov wrote on his Telegram channel.
13:16 GMT 25.05.2022
Ukrainian Budget to Get $7.5Bln of $40Bln Promised by Biden, Finance Minister Says
Ukrainian Finance Minister Sergey Marchenko said on Wednesday that $7.5 billion of the $40 billion promised by US President Joe Biden in aid funding would go to Ukraine's budget.

"Of the $40 billion in aid for Ukraine $7.5 billion will go to the Ukrainian state budget. It is grant money," Marchenko told Ukraina 24 television channel.

Ukraine’s monthly deficit stands at $5 billion, the minister estimated, with most of the money coming from foreign donors.

Biden signed the Ukraine aid bill into law last week. It authorizes roughly $20 billion for the Pentagon to spend on security assistance for Ukraine, including the provision of military equipment. The bill will also provide almost $9 billion in economic assistance, over $4 billion in humanitarian aid and another $4 billion in foreign military financing through the State Department.
13:00 GMT 25.05.2022
'They Killed and Humiliated People': Resident of Volnovakha Recalls How Ukrainian Forces Treated Civilians
12:37 GMT 25.05.2022
Zaporozhye Region Begins Preparations for Issuance of Russian Passports
The Zaporozhye region has begun preparations for the issuance of Russian passports, lists of people are being specified, Vladimir Rogov, a member of the main council of the military-civilian administration of the region, said.

Russian President Vladimir Putin signed a decree on the simplified admission of citizens of the Zaporozhye and Kherson regions of Ukraine to the citizenship of the Russian Federation. The document was published on Wednesday on the official Internet portal of legal information.

"This is not a secret. Now the administration is clarifying the lists of people and preparing the infrastructure and employees for organizing the issuance of Russian passports. This is a troublesome, but very joyful business," Rogov said.

According to him, the issuance of the first passports is a matter of "the coming days."

"I'm getting messages from people where to apply to get citizenship. These are written by ordinary residents of Melitopol, Berdyansk, Energodar, but most of all from Zaporozhye, despite the fact that the city is still, unfortunately, under the control of the Zelensky regime," Rogov emphasized.
12:28 GMT 25.05.2022
In Krasny Liman, Ukrainian Forces Use Patients in Local Hospital as Human Shields, DPR Head Pushilin Says
12:12 GMT 25.05.2022
Russian Foreign Ministry: Italy's Proposals on Ukraine Crisis Settlement Not in Touch With Reality
12:11 GMT 25.05.2022

"On 24 May, Russian engineers cleared the port in Mariupol, experts of the Black Sea Fleet transported a Ukrainian border patrol ship flooded by the so-called Azov people — that is, representatives of nationalist battalions — from the fairway. As a result, five foreign ships were able to go to sea," she said at a briefing in Moscow.
11:47 GMT 25.05.2022
Resident of Volnovakha Recalls How Woman Died as a Result of Ukrainian Forces' Shelling - Video
11:37 GMT 25.05.2022

"On May 24, Russian engineers cleared the port in Mariupol, experts of the Black Sea Fleet transported a Ukrainian border patrol ship flooded by the so-called Azov people — that is, representatives of nationalist battalions — from the fairway. As a result, five foreign ships were able to go to sea," she said at a briefing in Moscow.
11:05 GMT 25.05.2022
US Non-Renewal of Licence to Service Russia's External Debt Infringes Foreign Investors' Rights - Moscow
Washington's decision not to renew the existing general license that provided Russia with a range of exemptions associated with the debt repayment infringes on the rights of foreign investors and undermines confidence in the Western financial system, the Russian finance ministry said on Wednesday.

The US Treasury announced on Tuesday that Washington will not renew the license and will let it expire on 25 May.

"The decision of the US Department of the Treasury to refuse to renew the license for investors to receive payments on the Russian public debt primarily infringes on the rights of foreign investors in Russian debt instruments and undermines confidence in the Western financial infrastructure," the ministry said in a statement.

The ministry confirmed its readiness to continue servicing and repaying all debt obligations despite the tightening of external restrictions.

"Given that the refusal to renew this license makes it impossible to continue servicing the state external debt in US dollars, payments will be made in the Russian currency with the possibility of their subsequent conversion into the original currency of the obligation through the National Settlement Depository (NSD) as a paying agent," the statement added.