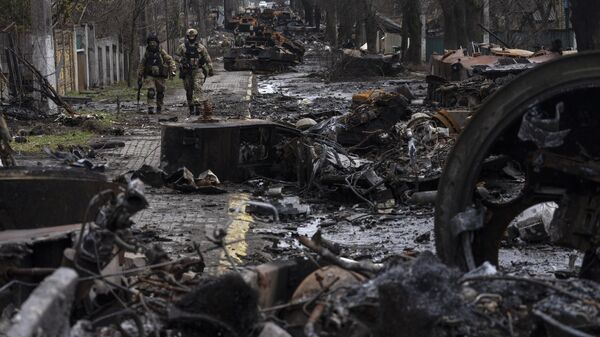 In February, Russia launched a special military operation in Ukraine to help the Donetsk and Lugansk People's republics (DPR and LPR) fend off intensifying attacks by Ukrainian forces. Russia's Defence Ministry said the operation, which targets Ukraine's military infrastructure, aims to "demilitarise and de-Nazify" Ukraine.
Servicemen of the Donetsk and Lugansk People's republics combined with Russian armed forces continue their advance as part of the special operation in Ukraine, driving back the Ukrainian military.
On Tuesday, Russia's deputy envoy to the United Nations, Dmitry Polyanskiy, said that Ukrainian militants from the Azov neo-Nazi battalion, who had been holed up in the Azovstal steel plant in Mariupol for the past few weeks, have unconditionally surrendered.
Follow Sputnik's live feed and Telegram channels to get the latest updates:
Sputnik News US — https://t.me/sputniknewsus
Sputnik News India — https://t.me/sputniknewsindia
New firstOld first
18:40 GMT 18.05.2022
Russian MoD Warns of Kiev's Plans to Carry Out Yet Another Provocation:
Ukrainian POWs said that Kiev is preparing a Bucha-type provocation in Konstantinovka in the DPR under the guidance of "curators";
As part of the provocation, Ukrainian militants dressed in uniforms of the Russian forces with white armbands will gun down civilians on camera;
The planned provocation will be "caught" on dashboard cameras of supposedly random cars, while the footage will be picked up by Western media.
17:05 GMT 18.05.2022
US Embassy in Kiev Resumes Work on Wednesday - Reports
16:50 GMT 18.05.2022
One Person Killed as Ukrainian Nationalists Shell Outskirts of Kherson - Authorities
15:59 GMT 18.05.2022

Biden: US to Help Finland & Sweden 'Deter, Confront Any Threats' as Their NATO Bids Being Considered
15:56 GMT 18.05.2022
UN Chief Seeks to Introduce Exemptions on Supply of Russian Fertilizers, Nebenzya Says
UNITED NATIONS (Sputnik) - UN Secretary General Antonio Guterres proposed introducing exceptions to the restrictions on the fertilizer exports from Russia, Russian Ambassador to the United Nations Vasily Nebenzya said on Wednesday.
"He [Guterres] is suggesting that we are exempt of any limitations on the export of our fertilizers in order to supply the world," Nebenzya said.
14:53 GMT 18.05.2022
Providing Medical Assistance to Ukrainian Servicemen From Azovstal is the Highest Priority, Everything Else Will be Decided Later - Russian Foreign Ministry
14:49 GMT 18.05.2022
Russia's Response to Finland's NATO Bid Will be a 'Surprise', Measures Will be of Military Nature, Zakharova Says
14:32 GMT 18.05.2022
Zelensky Suggests Extending Martial Law in Ukraine for 90 Days Starting 25 May
14:12 GMT 18.05.2022
Sixth Package of EU's Russia Sanctions Blocked, European Commissioner Gentiloni Says
13:57 GMT 18.05.2022
Moscow Shutting Down Canadian Broadcaster CBC's Office in Tit-for-Tat Move
Aside from closing down CBC's Moscow office, Russia will annul the accreditation of Canadian journalists, the Russian Foreign Ministry stated.
13:47 GMT 18.05.2022
Erdogan Urges NATO Allies to Respect Turkey's Security Concerns
Turkey expects its NATO allies to respect and support Ankara's concerns about its security, Turkish President Recep Tayyip Erdogan said on Wednesday.

"If we are allies, then Ankara's concerns about its security and borders should be respected and supported. We see that there is no such attitude toward us," Erdogan said during a meeting of the ruling Justice and Development Party.

Erdogan discouraged Finland and Sweden from sending delegations to Turkey next Monday, as scheduled, saying their visit will not change Ankara's opposition to their membership in NATO as his country "will not make the same mistake twice."

Earlier in the day, the ambassadors of Sweden and Finland submitted their countries' applications for NATO membership to the alliance's secretary general, Jens Stoltenberg, at the headquarters in Brussels.
13:31 GMT 18.05.2022
Yellen Says 'Reasonably Likely' That US Will Allow License Permitting Russian Sovereign Debt Payments to Expire After 25 May
13:20 GMT 18.05.2022
Yellen Says It Would Not Be Legal Now in US to Seize Russian Assets to Pay For Ukraine Reconstruction
13:18 GMT 18.05.2022
EU Has No Fast-Track Membership Procedure - Austrian Foreign Minister
There is no such thing as a fast-track procedure for joining the European Union, however Brussels should explore possibilities for accelerated EU integration with third countries, including Ukraine, Austrian Foreign Minister Alexander Schallenberg told Deutschlandfunk radio.

"There is no accelerated process. I fully understand on an emotional level that Ukraine has such a desire. I think we all have an interest in anchoring Ukraine in the European family, bringing Ukraine to European values and ways of life and anchoring it there. Nevertheless, we all know that the accession process can take years, if not decades. Turkey has had candidate status since 1999," the minister said in an interview to the German broadcaster.

Schallenberg added that the EU should think about new arrangement on how to promote integration with third countries to bypass the usual model of accession to ensure a high level of relations between them and the union, including political, economic, scientific and technological relations.

Kiev applied for EU membership under fast-track procedure on 28 February, shortly after Russia launched a military operation in Ukraine. On 9 May, French President Emmanuel Macron told the European Parliament that Ukraine's accession to the EU could drag on for years or decades unless the bloc is willing to lower the bar on its membership criteria.
13:11 GMT 18.05.2022
US Treasury Secretary Yellen Says Will Work With G7 Allies in Next Two Days to Boost Support For Ukraine
The United States and its G7 allies will discuss over the next two days more support for Ukraine and the US Senate is expected to approve $40 billion in additional aid for the Eastern European country, Treasury Secretary Janet Yellen said Wednesday.

"Over the next two days, I work with my G7 counterparts, to ensure we continue to stand together, to uphold our shared principles and extend our cooperation to boosting our support for Ukraine," Yellen told a news conference before the start of the G7 Finance Ministers and Central Bank Meetings in Bonn, Germany. "I expect that the [US] Senate will respond to the president's request and pass a package of $40 billion in security, economic, and humanitarian aid."
13:04 GMT 18.05.2022
Turkey Blocks Negotiations on Finland and Sweden's Entry Into NATO - FT
Turkey has blocked the start of consideration of the application for accession of Finland and Sweden to NATO, the Financial Times reported citing an informed source.

NATO ambassadors met on Wednesday to begin admission talks on the same day Finland and Sweden filed their bids, but Ankara's obstruction halted any vote, the newspaper said.

It noted that this called into question the ability of NATO to agree on the first stage of the application of the two countries within one to two weeks.

All 30 NATO member countries must ratify the applications of Finland and Sweden, but the process can only begin when the alliance issues a protocol of acceptance and formally invites these countries to join NATO.
11:50 GMT 18.05.2022
EU Commission Suggests Price Cap on Gas in Event of Full Supply Disruption
The European Commission unveiled on Wednesday short-term emergency measures to address rising energy prices and possible supply disruptions, including an administrative price cap on gas in the event of full disruption of supplies from Russia.

"To accompany these measures, an administrative price cap on gas might be necessary at EU level in response to a full supply disruption. If introduced, this cap should be limited to the duration of the EU emergency and should not compromise the EU's ability to attract alternative sources of pipeline gas and LNG supplies, and to reduce demand," the commission said in a statement.
11:40 GMT 18.05.2022
Moscow Announces Expulsion of 27 Spanish Diplomats - Foreign Ministry
Moscow expels 27 employees of the Spanish diplomatic missions as a retaliatory measure, they must leave Russia within seven days, the Russian Foreign Ministry said.

"It is emphasized that this unfriendly step will have a negative impact on Russian-Spanish relations," the ministry said.

"As a response, 27 employees of the Spanish Embassy in Moscow and the Consulate General of Spain in St. Petersburg have been declared 'personae non gratae.' They must leave the country within seven days from the moment the corresponding note was handed to the ambassador," the ministry stressed.
Earlier on Wednesday, Spanish Ambassador to Moscow Marcos Gomez Martinez was summoned to the Russian Foreign Ministry, and Moscow strongly protested in connection with the provocative announcement by Madrid of 27 employees of Russian foreign missions in Spain personae non gratae by Madrid.
11:34 GMT 18.05.2022
Zelensky Submits Bills to Parliament on Extension of Martial Law, Mobilization
The Ukrainian parliament registered on Wednesday bills submitted by President Volodymyr Zelensky on the extension of martial law and mobilization in Ukraine.

The texts of the documents have not been made publicly available.
11:26 GMT 18.05.2022
Finnish Gasum Expects Russia to Suspend Gas Supplies on 20-21 May
Finnish state-owned energy company Gasum said on Wednesday that Russia may suspend natural gas supplies on 20-21 May under the contract with Gazprom Export.

"Gasum considers there to be a real risk of the natural gas supplies under the company’s gas supply contract ending and that it is likely that imports of natural gas from Russia to Finland will cease either late on Friday, 20 May or on Saturday, 21 May 2022. Gasum has not received any information about the matter from Gazprom Export or from the Russian transmission operator," the company said in a statement.