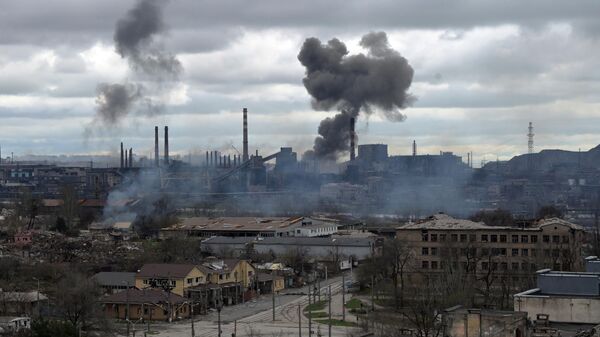 Russia launched a special military operation in Ukraine in February, amid intensifying attacks of Kiev's troops against the Donetsk and Lugansk People’s Republics (DPR and LPR). President Putin stressed that the op was started to stop the eight-year-long war in Donbass, noting that Russia's goal is "demilitarisation and denazification".
Russian forces and Donbass militias are advancing amid the special op in Ukraine. In the meantime, mass evacuations from the frontline continue: according to the Russian defence ministry, 1.1 mln people have been evacuated from Ukraine and Donbass to Russia since the beginning of the op.
Follow Sputnik's live feed and Telegram channels to get the latest updates:
Sputnik News US — https://t.me/sputniknewsus
Sputnik News India — https://t.me/sputniknewsindia
New firstOld first
21:34 GMT 05.05.2022
Accusations Against Russia of "Aggressive Nuclear Rhetoric" Baseless, Kiev Initiated Unhealthy Speculations About Unleashing Nuclear War - Antonov
20:40 GMT 05.05.2022
EU Countries Ask to Change New Package of Sanctions Against Russia - Reports
Berlin asks to tighten measures against Russia’s Sberbank and to limit cooperation with Russia in the nuclear field. However, the agency did not specify which measures were proposed by Berlin, while noting that the EC does not plan to ban deals with Sberbank and freeze its assets.

In addition, disputes reportedly continue on the topic of the oil embargo. Hungary and Slovakia, which were granted an exemption and can buy Russian oil for 20 months as compared to other countries that are allowed to buy oil only for the next six months, consider these exceptions insufficient, while the Czech Republic and Bulgaria want the same exceptions for themselves. Cyprus, Malta, and Greece also express concerns about an oil embargo, as they believe that their shipping companies will suffer from this measure, according to the news agency.

"In total, since 24 February, about 6 million people have crossed the border in both directions. This is in those areas where checkpoints have been preserved. Of this total, 4.1 million people, with the majority of them being Ukrainian citizens, proceeded to leave Ukraine. At the same time, 1.5 million of our citizens have returned," Demchenko told the Ukraine 24 broadcaster.

He said the numbers are given for the checkpoints on the border of Ukraine with the EU countries and Moldova, excluding Transnistria. The Ukrainian authorities blocked communication with the breakaway region of Transnistria from the first hours of the start of the Russian special military operation, according to Demchenko.
13:09 GMT 05.05.2022
German President Holds Phone Talks With Zelensky After Diplomatic Scandal - Reports
German President Frank-Walter Steinmeier held a phone conversation with Ukrainian President Volodymyr Zelensky, during which the counterparts discussed "misunderstandings of the past," media reported on Thursday, citing the German president's office.
It was a first phone conversation between the presidents since a series of political and diplomatic scandals broke out between Berlin and Kiev after the Ukrainian authorities refused Steinmeier a visit in April. After that, German Chancellor Olaf Scholz said that he was not yet planning visits to Ukraine.
Steinmeier and Zelensky discussed "misunderstandings of the past" during the conversation, and Zelensky personally invited Scholz and the entire German leadership to visit Kiev, the DPA news agency said.
According to Spiegel, the conversation lasted 45 minutes, and Steinmeier assured Zelensky of Germany's full support for Ukraine.
12:41 GMT 05.05.2022
Shell Loses Nearly $4Bln in Q1 Due to Withdrawal From Russian Oil, Gas Projects, Report Says
Shell, a British-Dutch oil and gas company, has lost $3.9 billion after withdrawing from its Russian operations, the company said in a quarterly report.

"For the first quarter 2022, we have taken post-tax charges of around $3.9 billion in relation to Russian oil and gas activities", Shell's Chief Financial Officer Sinead Gorman said in a video commentary to the report.

At the end of February, Shell announced its intent to exit from joint ventures with Russian energy giant Gazprom, its oil-producing subsidiary Gazprom Neft and other related entities due to Moscow's military operation in Ukraine. Shell has cut its involvement in the Sakhalin-II liquefied natural gas project, the Gydan energy project and the Salym Petroleum Development and terminated its participation in Nord Stream 2.
At the beginning of April, the projected losses from this decision were estimated at up to five billion dollars.

The company also announced considerable shifts in the Sakhalin-2 management, where Shell had a 27.5% interest.

"Significant influence over the Sakhalin-2 investment has been lost from April 1, 2022 with the resignation of Shell's executive directors and withdrawal of managerial and technical staff", the report said.

"Our military is well aware that the US, the UK, NATO as a whole, are constantly transmitting intelligence and other parameters to the Ukrainian armed forces. This is well known, and of course, coupled with the flow of weapons that these same countries and the alliance send to Ukraine, these are all actions that, let's say, do not contribute to the quick completion of the operation, but at the same time, are not capable of hindering the achievement of the goals set during the special military operation", Kremlin spokesman Dmitry Peskov told reporters.

"The [Danish] ambassador was informed that, as a response measure, seven employees of the Danish Embassy in Russia were declared personae non gratae. They must leave the country within two weeks. A diplomat of the Danish diplomatic mission was also denied visa", the ministry said in a statement.

Russia also reserves the right to take additional steps in response to the unfriendly actions of Copenhagen, which will be communicated to the Danish side later, the statement added.