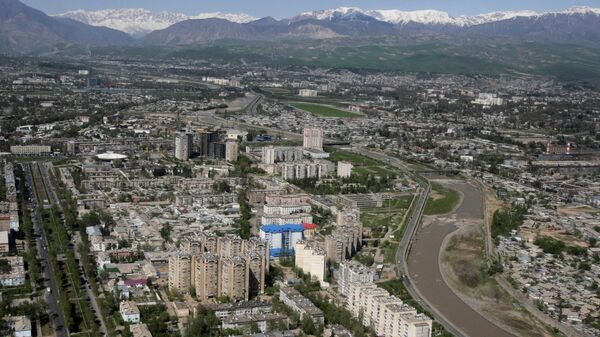 BISHKEK (Sputnik) - A shooting erupted between border forces of Kyrgyzstan and Tajikistan on Thursday, the Kyrgyz border service said, adding that the Tajik side used mortars and grenade launchers.
Earlier in the day, Bishkek said that forces were put on alert over "tensions" at the border over the Tajik side unilaterally blocking the area that connects two Kyrgyz towns, Batken and Isfara.
“However, at around 19:35 [13:35 GMT], the situation worsened due to the use of weapons by the Tajik side against Kyrgyz border units … in the area of Chyr-Dobo area of the Batken region. The main skirmishes between units of the border troops of Kyrgyzstan and Tajikistan are taking place in the areas of Tort-Kocho and Chyr-Dobo. The Tajik side uses mortars and grenade launchers,” the spokesperson of the border service said.
The border between Kyrgyzstan and Tajikistan sometimes turns into a conflict zone between local residents and border officers on both sides. The reason for the conflict: non-demarcated areas of where it is impossible to say which of the two countries the land belongs to.
Locals in Kyrgyz villages in the border area with Tajikistan are evacuating after a shooting between border forces of the two Central Asian countries started on Thursday, eyewitnesses said.

"There is an evacuation from the Samarkandyk region to the village of Ravat. Only women and children are being evacuated. The men remain," the eyewitness said.
Three Tajik soldiers were injured during the shooting and were hospitalised to a clinic in Isfara, Sputnik Tajikistan reported.
New firstOld first
17:44 GMT 27.01.2022
Tajik Village Resident Killed in Armed Incident on Border With Kyrgyzstan
During an armed incident on the Tajik-Kyrgyz border on the Isfara-Batken road, a resident of the Tajik village of Khoji Alo died from a gunshot wound, the mayor's office of the city of Isfara told Sputnik.
"During a shootout between Tajik and Kyrgyz border guards, a resident of the Tajik village of Khoji Alo, Obidjon Tuychiev, was lethally wounded," it said.
17:39 GMT 27.01.2022
Tajikistan Continues to Pull Military, Equipment to Border - Kyrgyz Border Service
Tajikistan continues to pull the military and heavy equipment to the Kyrgyz border, the Kyrgyz Border Service told Sputnik on Thursday.
It was reported that at the initiative of the Tajik side, a second phone conversation between the director of the Kyrgyz Border Service, Ularbek Sharsheev, and the commander of the Tajik border troops, Rajabali Rahmonali, took place at 16:18 GMT, the parties discussed ceasefire.
Sharsheev said that the Tajik side that does not cease fire, moreover, continues to pull heavy military equipment and personnel to the border. As of 23:00 (17:00 GMT), Tajik military personnel continue to periodically fire at the positions of Kyrgyz military personnel, the Kyrgyz Border Service said.
The Tajik side has asked for a ceasefire on the border, but it continues shelling, the Kyrgyz Border Service told Sputnik.
"The Tajik side requested a ceasefire. However, as of 22:30 (16:30 GMT), Tajik military personnel continue to periodically fire at the positions of internal troops, clashes continue in the areas of Eki-Tash, Kum-Bazar, Chir-Dobo," it said.
A meeting of the governors of the Batken Region of Kyrgyzstan and the Sughd Region of Tajikistan is also expected, it added.
17:37 GMT 27.01.2022
At Least Four Kyrgyz Soldiers Injured in Shootour on Border With Tajikistan - Health Ministry
17:35 GMT 27.01.2022
Intense Fire Continues on Both Sides of Conflict Zone on Tajik-Kyrgyz Border
Intensive fire from both sides continues in the conflict zone on the border of Kyrgyzstan with Tajikistan, the mayor's office of the Tajik city of Isfara told Sputnik.
"Intensive shooting continues in the conflict zone from both sides. Electricity is still cut off in the Tajik villages of Somoniyon and Khoja Alo. Isfara Mayor Bahovaddin Bahodurzoda is in the conflict zone," the office's spokesperson said.
17:34 GMT 27.01.2022
Number of Injured in Tajik-Kyrgyz Border Shooting Rises to 6, All Citizens of Tajikistan
The number of people injured in the shooting on the Tajik-Kyrgyz border increased to six, all are citizens of Tajikistan, Sputnik Tajikistan reported.
Previous reports said that three Tajik servicemen had been injured.
Doctors at the central clinic in the city of Isfara estimate that the condition of those wounded is not serious.
17:33 GMT 27.01.2022
Authorities on Both Sides Involved in Negotiations to Find Out What Caused Shooting
Authorities on both sides are currently involved in negotiations to find out what caused the shooting.
CSTO Secretary General Stanislav Zas has called for an immediate ceasefire on the border between Kyrgyzstan and Tajikistan, CSTO spokesman Vladimir Zainetdinov said.
Zas held phone conversations with the secretary of the Tajik Security Council, Nasrullo Mahmudzoda, and the secretary of the Kyrgyz Security Council, Marat Imankulov, "during which the CSTO Secretary General called for an immediate ceasefire between the parties on the border of Kyrgyzstan and Tajikistan," the spokesman said.
"The renewed clashes on the border, which resulted in injuries, cause serious concern. The armed confrontation on the Tajik-Kyrgyz border must be immediately stopped. The conflict must be resolved exclusively at the negotiating table by peaceful means. For this, the CSTO is ready to provide Kyrgyzstan and Tajikistan with the necessary assistance in resolving conflict. I am sure that the leadership of both CSTO member states will find mutually acceptable ways to resolve this complex border issue," Zas said.
Newsfeed
0
Access to the chat has been blocked for violating the rules . You will be able to participate again through:∞. If you do not agree with the blocking, please use the feedback form
The discussion is closed. You can participate in the discussion within 24 hours after the publication of the article.
To participate in the discussion
log in or register
loader
Chats
Заголовок открываемого материала