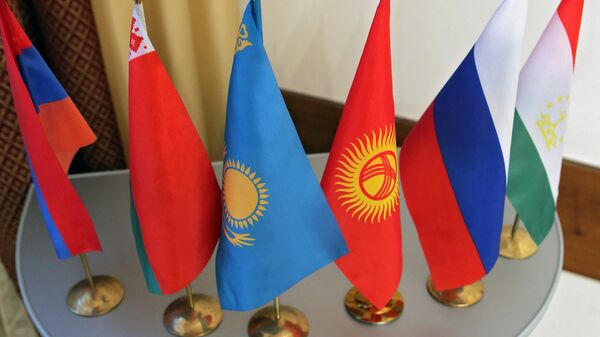 MOSCOW (Sputnik) - The session of the Collective Security Treaty Organization's (CSTO) Collective Security Council began on Thursday in Dushanbe.
Tajikistan's presidency in the CSTO coincided with a period of extraordinary challenges and threats faced by the region of collective security, Tajik President Emomali Rahmon said, when opening the meeting.
"Nevertheless, Tajikistan, with the support of its partners in the CSTO, has consistently carried out the presidency functions," Rahmon stated.
According to the Tajik president, a high level of political interaction and coordination of foreign policy positions have been achieved.
"We will continue to adopt statements on topical issues of the current international and regional agenda," he said.
Russian President Vladimir Putin takes part in the CSTO summit via video link.
Follow Sputnik's Feed to Find Out More!
Table of contents
New firstOld first
10:01 GMT 16.09.2021
CSTO to Use Its Peacekeeping Forces in UN-Led Operations, Secretary General Says
MOSCOW (Sputnik) - The Collective Security Treaty Organisation (CSTO) countries will be able to use their peacekeeping forces in UN-led peacekeeping operations, CSTO Secretary General Stanislav Zas announced on Thursday.

"Important documents were signed on developing the CSTO’s peacekeeping capacity, to which we pay special attention. A protocol was signed on introducing changes into the 2007 Agreement on the Peacekeeping Activities of the Collective Security Treaty Organisation. These changes allow for the use of CSTO peacekeeping forces in UN-led peacekeeping operations through a coordinating state-member of the CSTO," Zas stated.
08:43 GMT 16.09.2021
CSTO Countries Against Hosting Afghan Refugees, Foreign Bases on Their Territories
NUR-SULTAN (Sputnik) - The Collective Security Treaty Organisation (CSTO) countries are against hosting Afghan refugees and foreign military bases on their territories, the press office of Kazakh President Kassym-Jomart Tokayev said on 16 September.

Tokayev took part in a session of the CSTO Collective Security Council in Dushanbe on Thursday.

"The head of state supported the common position of the CSTO on the unacceptability of the deployment of Afghan refugees and foreign military bases on the territory of our countries. He said that, based on humanitarian considerations and the importance of providing international assistance to the Afghan people, personnel of the UN field missions in Afghanistan was temporarily deployed in Almaty," the press office said in a statement.
08:25 GMT 16.09.2021
CSTO to Implement Measures to Protect Southern Borders as Situation in Afghanistan Deteriorates
08:17 GMT 16.09.2021
CSTO Leaders Approve Plan for Equipping Rapid Reaction Forces With Modern Weaponry
MOSCOW (Sputnik) - The leaders of the Collective Security Treaty Organisation (CSTO) have approved the plan on equipping Collective Rapid Reaction Forces with modern weaponry, according to the declaration adopted after the Thursday summit.

"The heads of state also approved a plan for equipping the Collective Rapid Reaction Forces of the CSTO with modern weapons, military and special equipment, and special means," the declaration read.

"The head of state noted the need to conduct a dialogue with representatives of the new Afghan government on possible options for cooperation on various matters in order to promote stabilization," the presidential press service said.

Japarov also reaffirmed Kyrgyzstan commitment to maintain friendly relations with Afghanistan and not to interfere in its domestic affairs.

"We hope for the earliest possible stabilization and for the formation of a new inclusive government with a state structure acceptable for the people of this country," the Kyrgyz leader said, as quoted by his spokesman.

The president also expressed concerns about the possible influence of the events in Afghanistan on the CSTO security.

"The current unpredictable military and political situation in the region causes great concerns and requires close interaction. We ... call on all the CSTO member states to continue working together exclusively in a spirit of mutual support," Japarov went on to say.
07:10 GMT 16.09.2021
Lukashenko Believes West-China Competition Could Break International Relations System
MINSK (Sputnik) - The intensifying competition between the West and China could break the system of international relations, Belarusian President Alexander Lukashenko said on Thursday, describing the EU Globally Connected Europe initiative as an alternative to China's Belt and Road.

"The escalation of competition between the West and China is an important factor contributing to breaking the system of international relations. To strengthen its influence in Asia, the European Union has put forward a new initiative A Globally Connected Europe, which is in fact an alternative to China's Belt and Road," Lukashenko told the ongoing summit of the Collective Security Treaty Organization, as quoted by the Belarusian state-run news agency Belta.

Along with economic measures, the EU policy provides for further promotion of "democracy and European values" to the East, Lukashenko noted,

"We have recently seen these values and democracy, Afghanistan is not the only example," Lukashenko added.
07:03 GMT 16.09.2021
Putin Says Situation in CSTO Area of Responsibility Is Unstable, Carries New Risks
MOSCOW (Sputnik) - The situation in the Collective Security Treaty Organization (CSTO) area of responsibility is unstable and carries risks for regional countries, Russian President Vladimir Putin warned on Thursday, calling for closer coordination.

"As it was already noted, the situation in the CSTO area of responsibility and on the external borders of the member states is unstable and carries new truly acute challenges and risks for the security of our countries," Putin said at the summit of CSTO leaders.

CSTO leaders exchanged opinions about dangers associated with events in Afghanistan immediately after the "hasty" withdrawal of US troops and the change of power, the Russian president recalled.

"Everyone supported the conclusion that in the current conditions, the closest possible coordination between CSTO member states is needed more than ever," Putin concluded.
Newsfeed
0
Access to the chat has been blocked for violating the rules . You will be able to participate again through:∞. If you do not agree with the blocking, please use the feedback form
The discussion is closed. You can participate in the discussion within 24 hours after the publication of the article.
To participate in the discussion
log in or register
loader
Chats
Заголовок открываемого материала