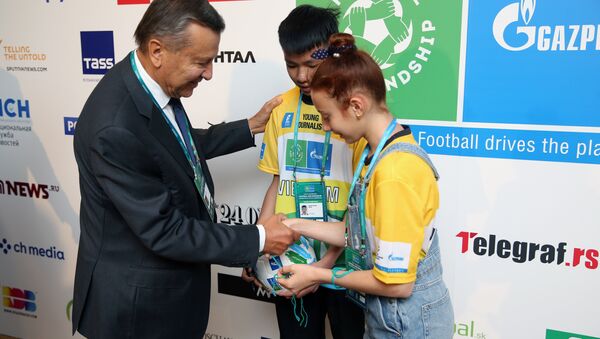 On 30 May, the International Children’s Social Programme of PJSC Gazprom’s Football for Friendship Forum 2019 was held in Madrid. The seventh forum brought together experts from around the world – football coaches, doctors of children’s teams, celebrities, journalists, and representatives of international football academies and federations.

Viktor Zubkov, chairman of the board of directors of PJSC Gazprom; Roberto Carlos, a legendary soccer player of the Brazilian National Team and Real Madrid FC, winner of the World Cup and three-time UEFA Champions League winner; Ananya Cambodia, the young ambassador of the programme from India; as well as Mikel Puch, head of the children's football school Soccer Barcelona Youth Academy, took part in the opening of the forum.

This year's forum brought together ten thematic sessions devoted to current issues in the development of youth sports. The experts discussed effective training methods, the management of children's sports activities, injury prevention in children's football, the peculiarities of parent-child dialogue, as well as methods of promoting nobility and justice in sports. Special attention was paid to teaching young athletes the nine values of "Football for Friendship", as well as what paths of professional development for a children's football coach exist today. 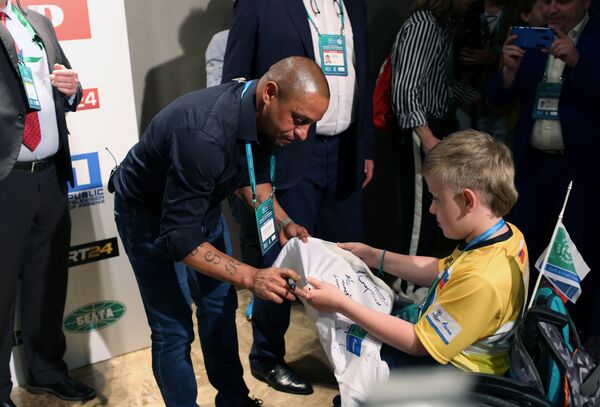 Cyril Pelleva, the spokesman for the UEFA Children's Fund; Joseph Gambao, the manager of Delhi Dinamos FC and coach of the Australian U23 national team; Alexey Smertin, director of the Russian Football Union for Regional Policy and International Relations; Pablo César Torres, president of the Youth Football and Scout Club Peñarol (Uruguay); Gerard Timmers, coordinator of the women's football club Alkmaar (Netherlands), and many others spoke at the event.

Hero of Award-Winning Photo of 2018 Stenin Photo Contest Attends Football Match in Moscow
In addition, a panel session was held with the participation of journalists from mainstream international media outlets on the impact of media on the development of children's football. Maxim Maximov, the editor-in-chief of the Sport-Express newspaper; Paula Vilaplana, a Euronews sports correspondent (France); José Dehesa, director of Radio Monumental (Bolivia); Stefan Bendik, a sports editor on RTS (Serbian National Broadcasting Network); Al-Jabi Nadim, chief editor of the football website Syrian Soccer Portal (Syria), and others were the event's key guests. In total, more than 150 journalists from around the world took part in the press conference, as well as successful young sports bloggers — Kilem Williamson from the UK and Simone Filippone from Italy, who shared their experiences in promoting children's football in their home countries with guests.

"I am pleased to participate in the Football for Friendship events. This unique social initiative of PJSC Gazprom is a huge contributor to the development of children's and youth football around the world. By uniting participants in 211 countries and regions of the world, Football for Friendship contributes to the global promotion of sports among the younger generation. The programme's educational initiative aimed at improving the skills of coaches will raise the level of training of young players around the world", legendary football player Roberto Carlos said. 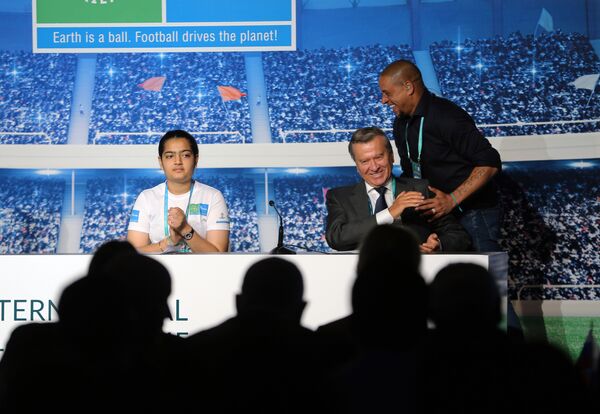 "Taking part in the opening ceremony of the International Football for Friendship Forum 2019 is a great honor for me! I am more than happy that this year I was fortunate enough to share the stage with such a legendary footballer as Roberto Carlos. Communicating with such adults, I feel how serious it is to be the Young Ambassador of the core values of Football for Friendship. For three years of participation in the project, I realised that any dream is achievable; the main thing is to persevere to your goal and believe in yourself. And then everyone will be able to show all the best that he is capable of", Ananya Cambodia (14 years), the young ambassador of Football for Friendship, said.

Information About the Programme

The international children's social programme Football for Friendship has been implemented by PJSC Gazprom since 2013. The core values promoted by the programme's participants are friendship, equality, justice, health, peace, loyalty, victory, tradition, and honour. Football for Friendship is supported by UEFA, FIFA, the International Olympic Committee, football federations of various countries, children's international charitable foundations, famous athletes, and world-leading football clubs. Over the past six seasons, the programme has united more than 6,000 participants and acquired over five million supporters, including famous athletes, artists, and politicians.