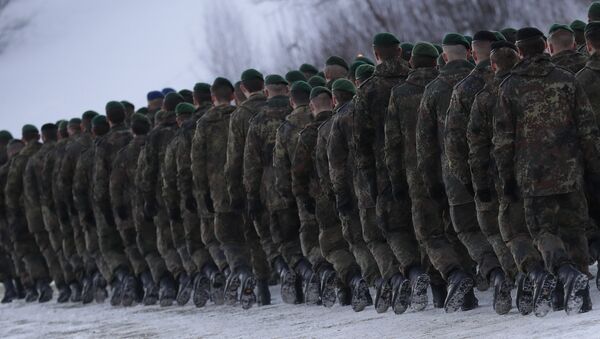 As a recent report by the SIPRI research institute revealed the dangerous worldwide armament tendency, SPD party member and Bundestag MP Marco Bülow commented on the trend in an interview with Sputnik.

German politician Marco Bülow has a critical view the ongoing arms race and slams Germany for being involved in it.

"Military spending is higher than during the Cold War. And the figures are going up. Unfortunately, Germany is actively involved in all this. Although, actually, we would need more money to fight the causes of the refugee crisis, in the field of climate protection, but also internationally in the area of humanitarian aid and development cooperation," the politician told Sputnik.

But precisely in these areas, according to Bülow, no additional spending is being planned. The politician stressed that his party has always opposed the idea of meeting NATO's defense spending target of 2 percent of GDP.

"We said that the Bundeswehr must be well equipped. But we are against these increase-orgies that the Union [CDU/CSU] demands," he said.

In this regard, the politician has positively assessed the developments in Russia. According to the report by the Stockholm International Peace Research Institute (SIPRI), military spending in the country decreased by 20 percent in 2017 compared to the previous year.

"It thwarts the danger that is always painted on the wall regarding Russia. If you look at these numbers, you see that at least in part, that's just not true. And I think that's why, above all, we should consider refraining from a one-sided policy against Russia. Dialogue and discussion are the better way," the politician concluded.

A total of $ 1.739 trillion was spent on defense purposes. The US ranks first with $610 billion, which is 35 percent of the world's military spending. Russia takes fourth place with $66.3 billion, while Germany has the world's ninth-highest defense budget with 44.3 billion.