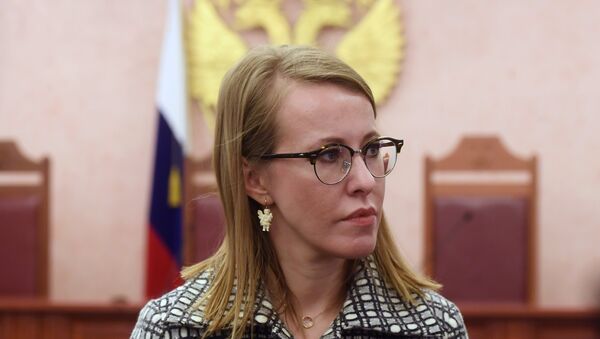 MOSCOW (Sputnik) - The website of Russian presidential hopeful Ksenia Sobchak, a nominee of the Civil Initiative party, has been subject to cyberattacks, Sobchak's election team headquarters said in a statement on Tuesday.

"The 'Against all' website has suffered cyberattacks, and that is why it is currently unavailable. We will try to restore its operability in the near future. According to specialists, the first wave of attacks has been repelled by our web-server, but the attempts have now intensified," the statement said.

Sobchak defines herself as a candidate "against all" and urges Russians, who do not support any candidates, to vote for her instead of boycotting the election.

Sobchak to Appeal Supreme Court Ruling to Uphold Putin's Candidacy in Election
The Russian presidential election will take place on 18 March 2018. Apart from Sobchak there are another seven candidates running for president this year: Sergey Baburin from the All-People's Union party, Communist Party candidate Pavel Grudinin, head of the Liberal Democratic Party of Russia Vladimir Zhirinovsky, incumbent President Vladimir Putin, the Communists of Russia party Chairman Maxim Suraykin, business ombudsman Boris Titov, and co-founder of the Yabloko Party Grigory Yavlinsky.
Newsfeed
0
Access to the chat has been blocked for violating the rules . You will be able to participate again through:∞. If you do not agree with the blocking, please use the feedback form
The discussion is closed. You can participate in the discussion within 24 hours after the publication of the article.
To participate in the discussion
log in or register
loader
Chats
Заголовок открываемого материала