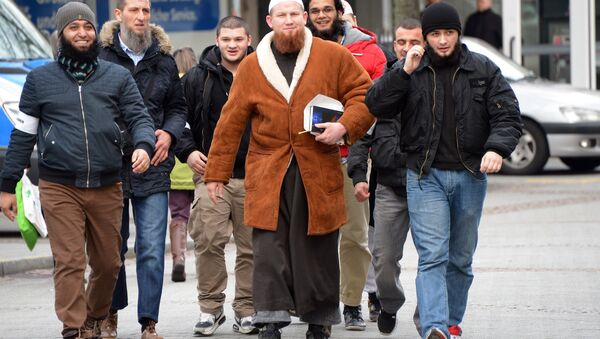 There are over 900 Salafists currently residing in the German capital alone, compared to 350 in 2011, and only a few among them are refugees.

Berlin has become a hotspot of the Salafist scene in Germany, Tagesspiegel reported on Tuesday, citing data from the Office for the Protection of the Constitution (BfV).

The number of Salafists residing in the German capital has almost tripled since 2011, growing to over 900 in 2017.

The proportion of potentially violent radicals has increased even more. Six years ago, the numbers of those who were considered to be prone to committing an act of violence was 100. The figures have risen in 2017 by more than four times, reaching 420.

Some 90 percent of Salafists in Germany are men with an average age of 33.9. Others are women of a younger age who primarily fulfill their roles as housewives and ideological propagandists.

Many of Salafists have been involved on the scene longer thanks to local infrastructure consisting of mosques, clothing shops and grocery stores, the report found.

Radical Groups 'Waiting for Right Time to Carry Out Attacks' in Germany
Salafism is an ultra-conservative branch within Islam. It advocates a return to the "original ways of Islam" and the implementation of sharia (Islamic law). The movement includes a huge range of beliefs — from non-violent forms, to radical Salafi Jihadism.

Germany has been on high alert over the rise of radical ideology on its soil amid a series of terrorist attacks across Europe, including an attack at a Christmas market in Berlin last year, when Daesh member Anis Amri stole a truck and drove it into a crowd, killing 12 people and injuring 48 others.