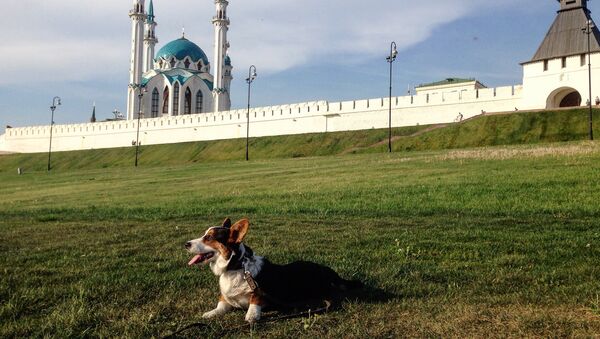 © Sputnik / Nik Pavlov
Subscribe
Nik Pavlov
All materials
Pastushok, a puppy traveling with us in a support vehicle, has become the symbol of our team. Just like everyone in the Long Way Home project, Pastushok is having the time of his life. Here’s how he’s spending his happy puppyhood days.

Having cycled almost 3,000-km and crossed the Ural Mountains, I think it's time to talk about my team members; without them, I would have never made it this far.

Many say the key member of our team is a 7-month-old Corgi named Pastushok.

While ringing in the New Year, my sister and I suddenly decided to get a corgi pup. Well, I admit we'd had a few drinks at the party, but it was a solid decision, which we intended to follow through on. To make a long story short, in February we welcomed Pastushok, or Pastushochek as we often call him, into our family.

When Sasha and I decided to cycle through Russia and my sister said she'd be joining us, that meant Pastushok would be tagging along with us as well. The little corgi pup became part of our family and we couldn't simply leave him at a dog shelter or with friends during the time we'd be absent from Moscow. And so just like that, Pastushok became a member of our team.

Some question whether Pastushok is having a hard time traveling across Russia in our support vehicle. But the truth is, he's actually enjoying the trip as much as everyone!

When he was younger I'd often take long walks with Pastushok in Moscow. One has to be quite careful when taking a dog for a walk on the streets of Moscow. There is a lot of garbage outside that puppies tend to pick up.

Occasionally, groups of so-called dog-hunters, self-proclaimed killers of stray dogs, leave food filled with rat poison in the streets. Along with stray dogs and cats — their intended targets — a number of pets perish after eating the poisoned food. Near Varshavskaya Metro station, where I lived, for example, a few people lost their pets following the evil deeds of dog-hunters.

So when living in Moscow, we couldn't really leave Pastushochek alone on the streets and let him enjoy the outside. Now, however, as we're traveling across the country, Pastushok gets to enjoy freedom. He loves to run and jump around with his stubby legs across the vast forests and plains of Russia, plunge into the Volga River and Lake Turgoyak and make new friends throughout the country.

While watching Pastushok grow up, I've come to understand that despite their smaller size and adorable looks, corgis were bred as strong, working dogs. Pastushok has a lot of energy and because of our traveling he gets to spend a lot of time outside running and playing around. It's hard to imagine how a corgi like Pastushok would have been happy growing up in a tiny two-room apartment in Moscow.

As I cycle across my country, I'm happy to have my dog around. After long and hard cycling days, exhausted, but happy, I make sure to spend time cuddling with Pastushochek. His energetic body gives me positive vibes, and helps keep going and to recuperate.

When looking at Pastushok, with his stubby legs and not-so-championesque-physique, I once again understand that it isn't necessarily to be strong, but to feel strong. Alex and I might not be the best athletes around and just like Pastushok, we might be undersized, but we certainly aren't underdogs.

000000
Popular comments
He has the look of a wise dog with plenty of attitude too... an old soul perhaps?