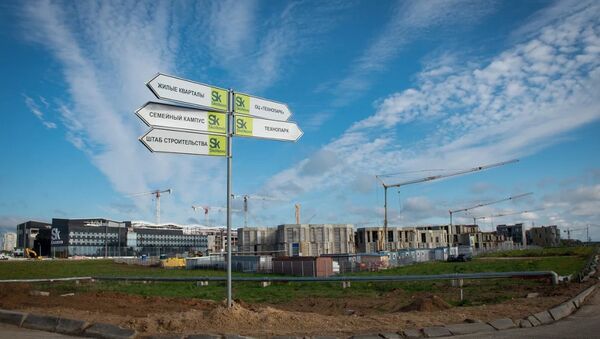 Our technical team at Our Russia was afforded a unique opportunity tour Skolkovo last week. We also discussed with key executives of Russia’s version of “Silicon Valley” the uniquely ambitious plans that differentiate Russia’s science city from all previous endeavors.

Russia’s first attempt at a science town since Soviet times, has goals and initiatives which are quite different from any previous project of the type. As a basis for creating a real and tangible foundation for invention, Skolkovo is not simply intended to be a research or production hub, but a fully functioning city where schools, shops, automated transport, and an entire infrastructure are to be built from scratch, over the next 10 years. But the vision is not simply to fashion a copy of Silicon Valley in the US, Skolkovo is intended to be a manifest backbone of a greater civic experiment. While some may argue this Russian effort is simply intended to replicate the success of Silicon Valley or other Adlershof in Berlin, the reality is far more appealing. Silicon Valley is an entity that grew up to serve technology, Skolkovo is being raised up for technology and society to coexist. The difference is of monumental importance.

At its center, Skolkovo’s structure now is formed by the University, and the Technopark. Situated alongside, the Congress Center and various office edifices, apartments, and stores, etc. these elements all serve as a nicely functioning small community. But, what is Skolkovo in reality? Zhores Alferov, the Nobel laureate in Physics said:

“Skolkovo — is not the territory, it is the ideology"

I was invited to visit Skolkovo by the foundation’s director, Alexsei Gonnchenko (image below). Since I was unable to make the trip to Moscow, I asked my co-founder at Our Russia, Aleksandr (Sasha) Shatskih and his wife Natalya if they could make the trip from their offices in Pskov. The team met with not only Alexei, but with the head of Skollovo’s Robocenter, Albert Yefimov (below). Both Sasha and Natalya were duly impressed, as I was initially, at the openness and enthusiasm of Skolkovo people. As it turned out, sending Our Russia’s resident “geeks” provided us with a special peek at what really makes this experiment so cool. 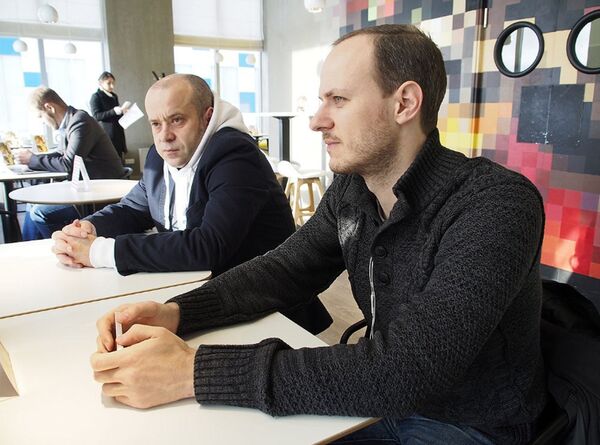 Albert Yefimov (l) and Alexsei Gonnchenko (r) talk with Sasha and Natalya
© Photo : Vladimir Samarin
Comparing Skolkovo’s Innovation Center to Adkershof, Sasha also made mention of his respect for the noted professor, Kalus Thyssen, whom he’d met on visiting the German tech center. Apparently, according to our geeky couple, all comparison in between these two civic engagements begins and ends with brilliant scientists like Thyssen, and his counterparts innovating robots and more in Russia. Short version, there is no comparison. In just six years the Skolkovo Innovation Center has, in our humble views, utterly surpassed 19 years of effort at Adlershof. Sasha gives his reasons for this.

The biggest point of differentiation in between Skolkovo and Adlershof (or Silicon Valley), is that Skolovo is not about inventing or producing technology, it’s about existing as an effective tool for implementing stunning ideas, for bringing those ideas to life. I have my own reasoning on this, a reason galvanized by the concept of an organic atmosphere of creativity. Better still, Skolkovo ventures outside convention in the way ideas are cultivated too. Sasha offers his example:

“So you have an idea you think is good? Excellent! Send it to the expert committee, a commission of world experts drawn at random, and anonymously, for a selection in sheer objectivity.”

The more than 250 randomly selected experts from different countries know absolutely nothing of the participants in  Skolkovo’s selection process. Likewise, contestants know nothing whatever about those who will choose the best ideas. Unlike the system I am familiar with in the United States, a system powered by venture capital and more often a “coolness” or popularity factor, the Russian variant seeks to enrich absolutes. I’m sorry to say, after having been a technology writer for a decade covering US innovation, innovation in the west resembles pop culture and celebrity value, as often as practical excellence. I think this is a fair statement. Albert Yefimov offered this with regard to the proving of the Skolkovo experiment:

“The world is not flat anymore, even though some keep thinking of it as super-connected place where you can live and work no matter where your business. It has irregularities – in order to get something done in IT or robotics, which both migrate to cyber-physical, we need the right people, the right connections, with the right devices and with the best mentors. All of this will be available, all in a matter of a 20 minute journey.”

The Skolkovo robotics guru went on to parlay for us the real mission we’ve sought to outline for you. Yefimov went on to say; “One cannot get in touch with world renowned team of ExoAtlet, without landing here at Skolkovo.” In essence the human interface, interlacing with technology via this civic experiment, it demands that participants exist in the ecosystem of Skolvoko. This place outside Moscow will eventually become “THE” place to be to be connected to these stunning technologies. While the internet and digital will certainly make use of the developments, the social experimentation is about a local community, a nest, for raising a new kind of future. Yefimov tells us; “Skolkovo, even city roads and buildings will eventually become our testing grounds. This is in the works as soon as safety requirements are acknowledged and respected.” 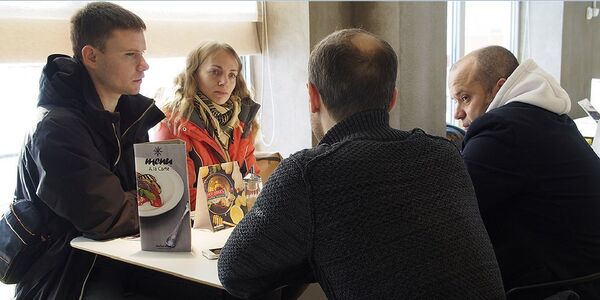 Sasha (l) and Natalya (r) talk with Skolkovo’s innovators about the future of the experiment
© Photo : Vladimir Samarin
This is the “magic” that Skolkovo promises. The creators of the best ideas receive grants, and a place to produce their prototypes. According to Sasha, production capacity for 1,000 units is possible. The Innovation Center of Skolkovo therefore eliminates several problems of developers, which Sasha enumerates:

Innovators have no need to seek investors. There’s also no need to worry about where and on what means to embody an idea. Skolkovo “residents” dive into a community of dedicated people, at every level. New opportunities for implementing ideas are resident in the whole community.

So the intended purpose of Skolkovo, to help create a start-up companies that will generate new technologies, is long since underway. The initiative is already leading to science that bears fruit for the economy. And the creators of these start-ups earn good money as one end result, which Shasha contends, is what will perpetuate the good work.

Alongside Sasha’s enthusiasm, Natalya also pitched in with the practical side of viewing Skolkovo. The vast potential of Innovation Center Skolkovo does not come without costs. Natalya points out, the costs of leasing at the science city equals office space in Moscow. And it is not currently possible to live on side at Skolkovo for even grant recipients, a hurdle Natalya tells me will be resolved by 2017. She also points out, that Skolkovo’s vision of fundamentally transforming education, science, and tech development, is more expensive than operating using traditional methodologies. But this is always the essence of innovation; the paradigm is never achieved with great ease.

At the moment five basic directions of development are resident in Skolkovo, they include; IT, Biomedical, Energy, Space, Nuclear power, and the soon to launch Agriculture aspect. To support these endeavors, there’s already a business center, Skolkovo Institute of Science and Technology, Open University, Skolkovo School, High School, along with research laboratories and infrastructure. In my talks with Alexsei Gonnchenko recently, the subject of future Skolkovo accomplishments has come up. And Sasha and Natalya also iterate, the true potential of this social-technical experiment will manifest itself more clearly once the aforementioned growth draws more talented young people, more scientific, technological, and entrepreneurial competence. Alexsei’s focus has largely been in helping these young thinkers ramp up their ideas via the Skolkovo Foundation efforts. 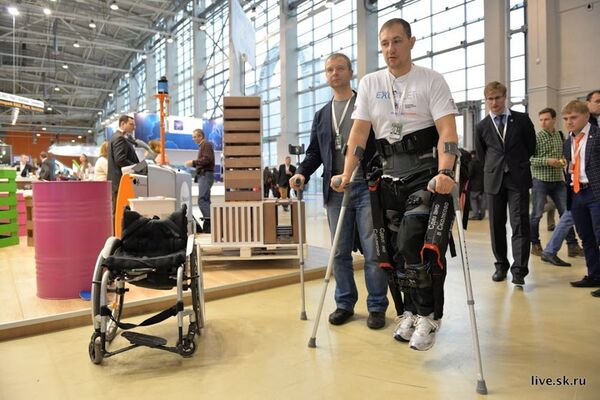 The ultimate value of ingenuity, our lives truly enhanced by technology
© Photo : Skolkovo Foundation
In conclusion, I quizzed both Sasha and Natalya on what they found most impressive about Skolkovo at this stage. Both Our Russia partners agreed, the medical exoskeleton “ExoAtlet” is by far the most compelling potential they discovered on their tour. Yefimov’s Robo-laboratory has made amazing progress in many areas, but none more engaging than robotics already helping wheelchair bound human beings, to get up and walk.
000000
Popular comments
HOW I WAS SAVED FROM A COLLAPSING RELATIONSHIP BY Dr savior THE GREAT SPELL CASTER I want to say thank you to Dr savior for the good thing he has done for me,Though am not sure if this is the best forum to show my joy and happiness for what he has done for me but i can't hide my happiness and my Joy so i have to share it with people, my marriage got crashed about two years ago and i tried all i could within my power but to no avail. i saw post and testimonial about the good things Dr,savior has been doing so i decided to give it a try. though he is always a busy man but when he responded back to my email, he gave me 48 hours for my marriage to be restored really just like he said my marriage was restored since then I am happy and i am living happily i am so grateful to Dr savior you can always email him here: {dr.saviour12@gmail.com}
amanda paul
29 February 2016, 03:52 GMT
000000
Newsfeed
0
New firstOld first
loader
LIVE
Заголовок открываемого материала
Access to the chat has been blocked for violating the rules . You will be able to participate again through:∞. If you do not agree with the blocking, please use the feedback form
The discussion is closed. You can participate in the discussion within 24 hours after the publication of the article.
To participate in the discussion
log in or register
loader
Chats
Заголовок открываемого материала
Worldwide
InternationalEnglishEnglishMundoEspañolSpanish
Europe
DeutschlandDeutschGermanFranceFrançaisFrenchΕλλάδαΕλληνικάGreekItaliaItalianoItalianČeská republikaČeštinaCzechPolskaPolskiPolishСрбиjаСрпскиSerbianLatvijaLatviešuLatvianLietuvaLietuviųLithuanianMoldovaMoldoveneascăMoldavianБеларусьБеларускiBelarusian
Transcaucasia
ԱրմենիաՀայերենArmenianАҧсныАҧсышәалаAbkhazХуссар ИрыстонИронауОssetianსაქართველოქართულიGeorgianAzərbaycanАzərbaycancaAzerbaijani
Middle East
Sputnik عربيArabicArabicTürkiyeTürkçeTurkishSputnik ایرانPersianPersianSputnik افغانستانDariDari
Central Asia
ҚазақстанҚазақ тіліKazakhКыргызстанКыргызчаKyrgyzOʻzbekistonЎзбекчаUzbekТоҷикистонТоҷикӣTajik
East & Southeast Asia
Việt NamTiếng ViệtVietnamese日本日本語Japanese中国中文Chinese
South America
BrasilPortuguêsPortuguese
NewsfeedBreaking
18:52 GMTViolent Night in Alencon, France Leaves 13 Vehicles Torched After Teens' Arrest For Selling Drugs
18:45 GMTRail Union Makes Final Offer to ScotRail as Strike Looms During COP26
18:31 GMTPolish Justice Ministry Suggests Withholding EU Contributions After Court of Justice Fine
18:27 GMTIsrael OKs Almost 3,000 New Housing Units in West Bank
18:12 GMTPrince Andrew Sex Scandal: Judge OKs Keeping Key Epstein-Giuffre Settlement Secret
18:03 GMTTwo Russian Tu-160s Fly Over Barents, Norwegian Seas
17:48 GMTDaughter of Former Saudi Official Claims MBS' Agents Tried to Lure Her Into Istanbul Consulate
17:35 GMTIndia Will Have All of Kashmir 'Some Day', Says Top Air Force Officer
17:33 GMTEx-Punjab State Chief Announces His Own Party Ahead of Crucial Assembly Polls
17:20 GMTSwedish Public Health Agency Recommends COVID-19 Booster Jabs for Citizens Over 65
17:20 GMTFootball Fans Abuzz Over Alleged Ballon d'Or Final Standings List Leaked Online
17:16 GMTPutin Instructs Gazprom to Start Boosting Gas Volume in UGS Facilities in Austria, Germany
17:15 GMTIndia Successfully Test-Fires Its First Nuclear-Capable Intercontinental Ballistic Missile Agni 5
17:09 GMTAryan Khan's Bail Plea Adjourned: Key Points His Lawyers Have Argued Before Bombay High Court
16:52 GMTNicolas Cage Reportedly Complained About Armourer Who Worked on Rust With Alec Baldwin
16:52 GMTSetback for Modi's 'Act East Policy' as Adani Abandons Port Project in Myanmar
16:44 GMTLeningrad Region Making Serious Efforts to Integrate Migrants Into Society
16:37 GMTGas Stations in Iran Resume Work Following Alleged Cyberattack
16:33 GMTTurkey Deploys Troops on Syrian Border to Launch Offensive Against Kurds, Report Claims
16:30 GMTFlorida Judge Agrees to Transfer Trump-Twitter Case to California