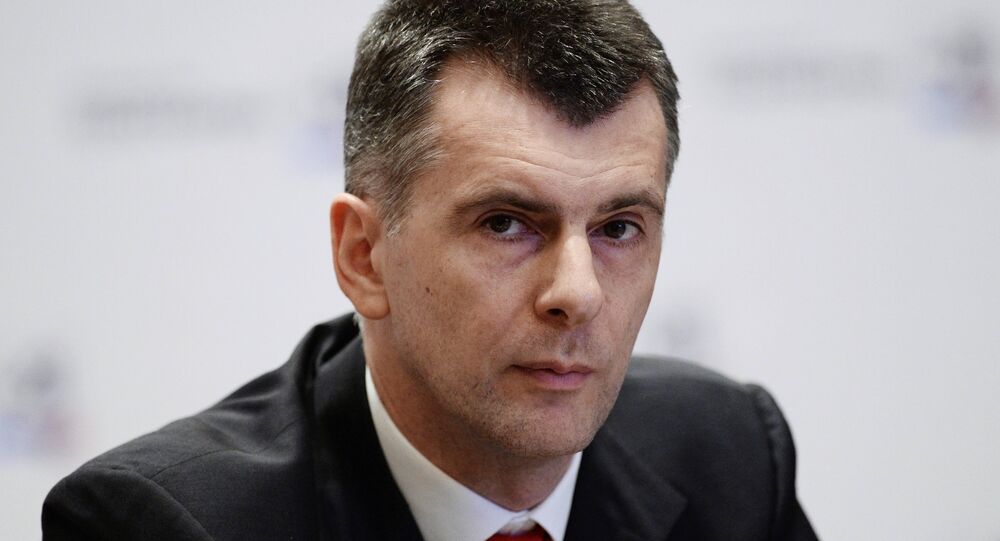 Pavel Rodkin — Mikhail Prokhorov has published a major policy article entitled "NEP 2.0."* The third section, which addresses the most sensitive areas of social policy such as employment, healthcare and education, has generated the largest response. What Mr. Prokhorov said is interesting primarily because he is simply repeating the basic principles of the liberal-capitalist social reorganization project promoted by the existing global power broker. The social state is the only obstacle standing in the way of it becoming reality.

Emissaries of the global super-society

It would be wrong to dismiss Mikhail Prokhorov's remarkably consistent statements as a political stunt by an eccentric billionaire politician. It makes no sense to reproach him for immorality or "cannibalism." Prokhorov is an exponent of a coherent system of views and ideological precepts characterizing the Western global super-society (to use Alexander Zinoviev's term) and is one of its ideological "emissaries." The global super-society operates according to a different kind of morality and values that provide a rationale for a system of power based on social and economic inequality and dividing people into upper and lower echelons. It is increasingly difficult to ignore the crisis in the current socioeconomic system and the erosion of the existing consensus, and so a number of global players want to intensify the crisis.

The article, and even the political language it uses, may strike readers as an irrelevant throwback to the 1990s. But this is not the case. Prokhorov chose to publish his program right now as a strong response to these ongoing changes. He draws a roadmap based on the old US liberal capitalist social model, notorious for its attitude to labor and the individual — a model aimed at perpetuating the power of capital through the social reorganization of mankind.

The first step on this road is to dismantle the welfare state, one of the main achievements of scientific and technological progress. Prokhorov is not satisfied: "Our social policy is directed not so much at creating opportunities for personal self-fulfillment as maintaining a certain level of wellbeing for all at once." The new Dutch king, Willem-Alexander, made similar comments in September 2013: "The 20th-century social state is no more." Instead, he proclaimed a "participation society."

The social reorganization of mankind

It would be naïve to think that what is envisioned is merely an efficient private sector that has no obligations to society and is free from government restrictions, and yet still somehow supports both society and the state. The economy and business are not the ends in themselves, but tools of social reorganization. The growing complexity of the social and professional structure of society (resulting from the evolution of new technological systems) goes hand in hand with the simplification of its organization, as expressed in the increasingly archaic, supra-class  division of "capital-power" — "worker-slave", which dehumanizes the latter.

The welfare society project implemented simultaneously in the USSR and the US-led West has become obsolete and no longer performs any ideological function now that the global confrontation between the two systems is over. Moreover, general welfare has become a dangerous idea. The best description of this sentiment is found in "The Theory and Practice of Oligarchical Collectivism" from George Orwell's 1984: "…An all-round increase in wealth threatened the destruction — indeed, in some sense was the destruction — of a hierarchical society…. If it once became general, wealth would confer no distinction…. For if leisure and security were enjoyed by all alike, the great mass of human beings who are normally stupefied by poverty would become literate and would learn to think for themselves; and when once they had done this, they would sooner or later realize that the privileged minority had no function, and they would sweep it away."

The USSR was destroyed by the West, opening the gate to a social counter-revolution which proved a veritable social catastrophe for the world. But the principles of the Soviet super-society have not been completely destroyed; they persist and can be implemented even in present-day society. This is what alarms Prokhorov in particular: "By taking upon itself too much responsibility, the state keeps alive the society's Soviet attitude to education and healthcare as a ‘non-productive' sphere, as something that can be received for free, thereby blocking the introduction of modern business approaches." Thus, "NEP 2.0" (more accurately, "Slavery 2.0") means the end of socially useful work and the dismantling of the social state.

The state is being killed under hypnosis

Consumption, which is still associated with prosperity, continues to perform the function of social hypnosis and serves as a showcase of capitalist society, despite the fact that it has become a universal tool of alienation, the return of wages, and the enrichment of capital — capital being the only fully-fledged power broker within that closed system. But the expansion of consumption has its limits and is approaching the stage where it is unable to function without incentivization or coercion.

The magic of consumption, which was effective during the Cold War, is evaporating. A new trick designed to conceal the real mechanisms of power is so-called human capital. Prokhorov doesn't fail to mention it, saying that the modern economy is an economy of human capital, in which people are "the main asset and the main source of added value." At this point I should stop and explain something fundamental. Human capital is perceived by society as positive in the sense that human beings are considered valuable. But capital's view of people is totally different and archaic: the number of slaves and the quality of the slave workforce are what constitutes a master's capital. Human capital is the acme of dehumanization, and Prokhorov makes no bones about it: "Housing and utilities infrastructure, public transit and food provision, law and order, science and defense are important areas of the economy and public services, but they should not be confused with human reproduction."

There is a powerful indoctrination mechanism that serves the interests of the modern economy and prevents people from realizing what is going on.  The most frightening thing is that Prokhorov's arguments find support among the so-called creative class, who approve of his program, refusing to believe it could ever backfire on them. Why? The mentality of the creative class, which shares the ideology of liberal reforms, is based on a false social identity. It regards itself as the upper crust of society and associates its interests with those of capital, even despite the fact that it consists of hired workers.

Today false identity is both a geopolitical and social tool. Its geopolitical consequences are in evidence in Ukraine — a topic that requires further detailed study. Its social effects can be observed in Russia. Prokhorov's initiatives are perceived by the overwhelming majority of people as wild and antisocial. But what if they receive information and humanitarian support? We must realize that as soon as the state grows weaker, global liberal capitalism will instantly stage a large-scale, punitive social operation that will exceed in scope the shock reforms of the 1990s. The plan has been drafted and published.

Pavel Rodkin is a branding and visual communications expert, PhD in art history, member of the Rossiya Segodnya Zinoviev Club