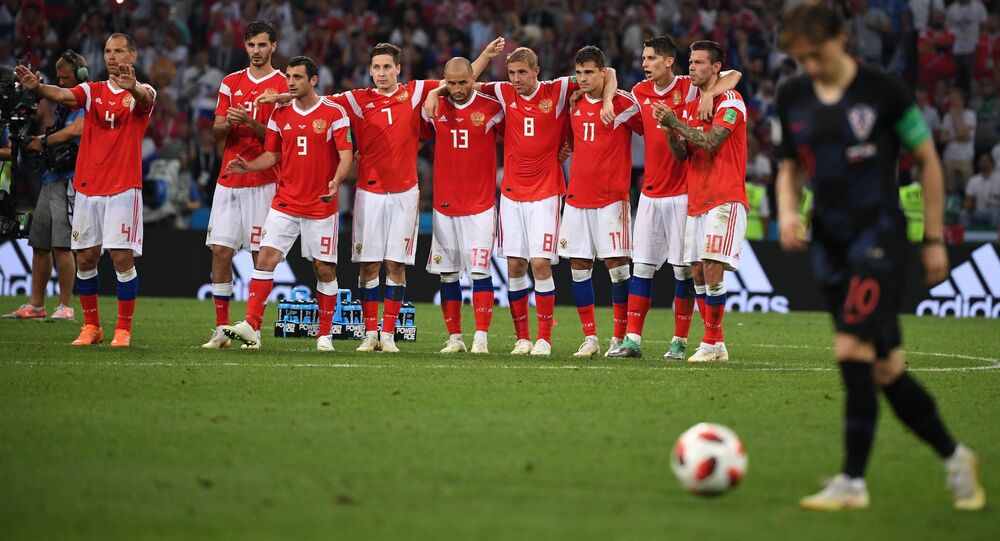 MOSCOW (Sputnik) - Russia was eliminated from the FIFA World Cup tournament, as Croatia beat them on a dramatic penalty shootout 4-3 in Sochi on Saturday to advance to the World Cup semi-finals, where they will face England on Wednesday. The thriller match finished 2-2 after extra time.

Russian President Vladimir Putin noted the strong-willed performance of the Russian national football team in the quarter-final match with the Croatian team, and invited players and head coach Stanislav Cherchesov to discuss the results of the FIFA World Cup, Kremlin spokesman Dmitry Peskov said on Sunday.

"Putin called Cherchesov on Saturday before the match and wished success in the game… After the end of the match, Putin called him again and noted the worthy performance of the [Russian] players in the championship, as well as a beautiful, strong-willed game in the historic match against Croatia. The president invited the head coach and the players of the national team to the event dedicated to summarizing of the championship results and discussing issues of determining the heritage of the World Cup in Russia," Peskov said.

"We will have a different type of football after your performance, I'm sure. You were great, thanks a lot for all the matches and for this one in particular. Maybe I'll say something that may seem strange, but it was the best match in the history of the Russian national football team," Medvedev told the players after the match.

Meanwhile, Russia head coach Stanislav Cherchesov said on Saturday that he had no regrets about his decisions during the FIFA World Cup.

Stanislav Cherchesov said on Saturday that the entire country knew what the Russian national football team really were capable of following their performance at the World Cup.

“We cannot ask the people to believe in us, and we said it on day one. We could only make [them] like us by doing [good] work. And now the entire country knows what the Russian national football really are capable of. I hope we changed their minds for the better,” Cherchesov told journalists.

Meanwhile, Croatia head coach Zlatko Dalic said on Saturday that his side's World Cup quarterfinals opponents were a team "of the highest level."

"I want to congratulate [Russia ehad coach] Stanislav Cherchesov and the Russian team on such a game. They have their own style… Russia scored very beautiful goals. They were fighting, they were acting as one… They have incredible supporters. They were a team of the highest level. Not any team can reach the quarter-finals," Dalic told journalists.