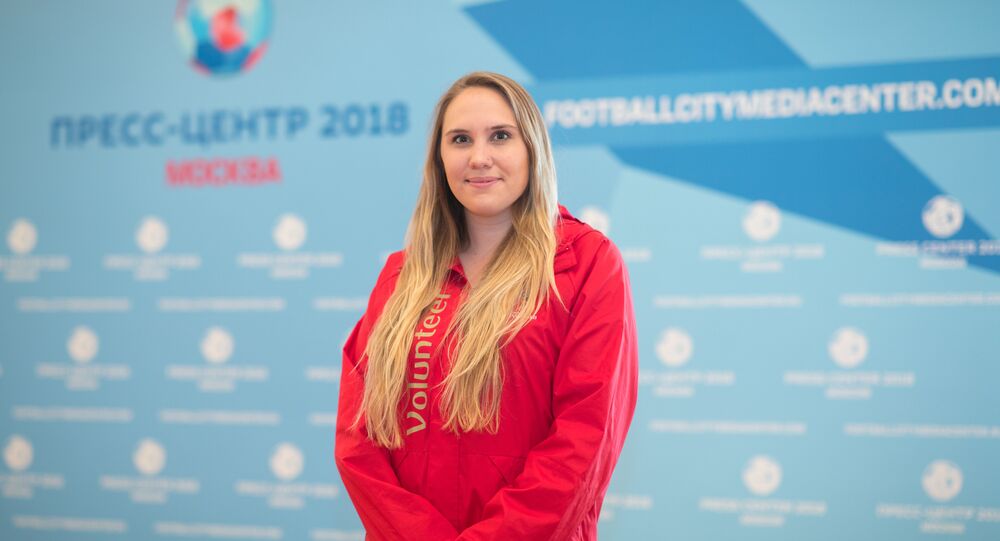 Julia Ivanova, a US volunteer, speaks fluent Russian. She was born in Cyprus and spent several years in Moscow before later moving to the US. She lives in California and goes to college in Michigan. During the World Cup, she’s volunteering at Moscow’s Spartak Stadium.

Julia shared her impressions of the tournament and her plans for the future with the “Year of Volunteering” project. Julia likes football. She used to play soccer but an injury made her stop playing sports. However, she can still be a fan. From an early age, Julia has liked helping people, so when in February 2018 her college announced they would recruit volunteers for the FIFA World Cup in Russia, she immediately filed an application, despite not having much volunteering experience.

“Russia, football, this whole event – I just had to come. There were about 40 applicants but only 5 were selected, in early March I learned I was one of them,” Julia says. Julia studies sports management so the trip to Russia allowed her to gain some work experience.

Volunteers Have to Act Quickly and Accordingly.

The girl’s schedule isn’t fixed; there’s always someone in the street to ask her for directions or where printing stations are, there are various questions she’s being asked.

“At the Spartak stadium I work with volunteers – make sure everyone’s ready for the day, that everyone’s got their uniforms, and knows their schedules and tasks. Three to four hours before the match while fans are entering the stadium, the volunteers are in the street guiding them; and our job is to make sure no volunteer is on the field when the match starts,” Julia says.

© Sputnik / Grigoriy Sysoyev
Russian Kokoshnik: FIFA Football Fans Love Wearing Traditional Headdress
23
Regarding the Cup organization, the girl says it’s great and everything’s under control. Even if something unexpected happens, volunteers tend to manage it; the fact that they can act quickly is great. "Managers have a lot to do here – as our team’s international, we have to help people deal with language problems, keep spirits up; we have to act accordingly."

“At the first match there were people to carry the flags but they had their luggage with them, so not only did we have to accredit them but we had to keep their luggage, about 200 bags, and then give it back and not get into a muddle,” Julia says.

The World Cup Is a Lot of Fun

After Spartak hosted its last match, Julia was offered the opportunity to work at Luzhniki Stadium but she refused. She wants to enjoy Moscow and catch up with her friends. She says she’d like to visit her relatives in Murmansk but it’s a long way, and there’s even no time to visit St. Petersburg.

“I’ll go there next time. This time I’ll be a tourist and a fan, I’ll support Russia though my favorite team is Germany,” Julia admits.

© Sputnik / Maud Start
What's All This About the Russia and England Fans Getting Friendly in Red Square? (PHOTO, VIDEO)
Julia visited Moscow 11 years ago and didn’t really like it. This time, it's a different story. “I’ve already told all my friends to save money for visiting Moscow” – she laughs.

According to Julia, for many World Cup visitors, Russia turned out nothing like they had expected. There’s no aggression, every city’s really festive, and different fans get along well and congratulate each other on their teams’ victories.

One of Julia’s Mexican friends came to watch the Mexico-Germany match and was really surprised to see a different Russia from what they hear from the media. He now wants to come here again and spend more time in the country.

© Sputnik / Konstantin Chalabov
How England Fans Have Fun in Russia
Julia also decided to stay in Russia a little longer – she switched her flight to spend one more week with her friends and Samara volunteers that have come to Moscow.

Julia’s first volunteering experience was so much fun that she's decided to volunteer for the 2022 and 2026 FIFA World Cups.
“I thought it would be interesting and fun but I didn’t expect it to be that great. Volunteering was my choice, I like doing it – I’m helping people. That’s great!”