Switzerland beat Serbia 2-1 in Kaliningrad in their second Goup E match on Friday. Shaqiri, after sealing the important victory for the Swiss in stoppage time by breaking the offside trap and cooly slotting the ball into the net, was named man of the match.

However, Shaqiri  celebrated his goal by making a double eagle gesture with his hand to represent the Albanian flag. Moreover, another scorer from Swiss's squad Granit Xhaka is also under scrutiny of FIFA's officials. After celebrating his goal, he also clasped his hands to produce a symbol mimicking the double headed-eagle on the Albanian flag.

During a heated encounter between Serbia and Switzerland, BBC reporters noticed that Shaqiri was wearing boots with an inscription of the Kosovo flag. After the game, when asked if Shaqiri's gesture meant anything, the Swiss winger said that it was purely emotional and the gesture did not have any deeper significance.

FIFA strictly prohibits all political messages or symbols in its events. Xhaka and Shaqiri could be banned for up to two games if they are found to have violated a FIFA policy.

Both Switzerland players are from the former Serbian province of Kosovo. In 2008, Kosovo declared  its independence from Serbia, a move  Belgrade refuses to recognize alongside a number of other states. 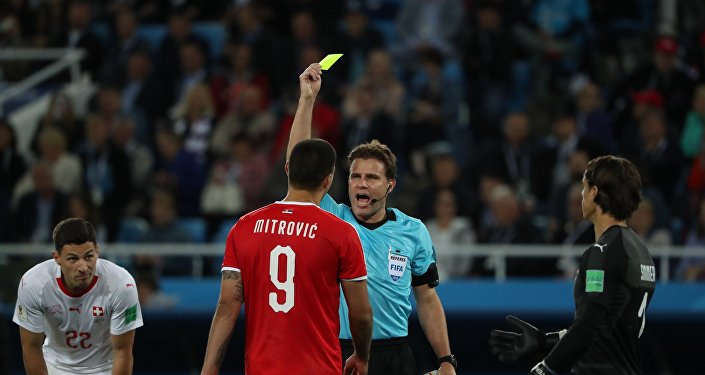 © Sputnik / Elena Rusko
Serbia to File Complaint With FIFA Over Refereeing in Game With Switzerland
The Serbian Football Association has also reportedly filed a complain to FIFA officials about a Kosovo flag on one of Xherdan Shaqiri's boots.

Switzerland, who have four points after two matches and are second in the Group E standings, will face Costa Rica in their final group-stage game at the Nizhny Novgorod Stadium on Wednesday.