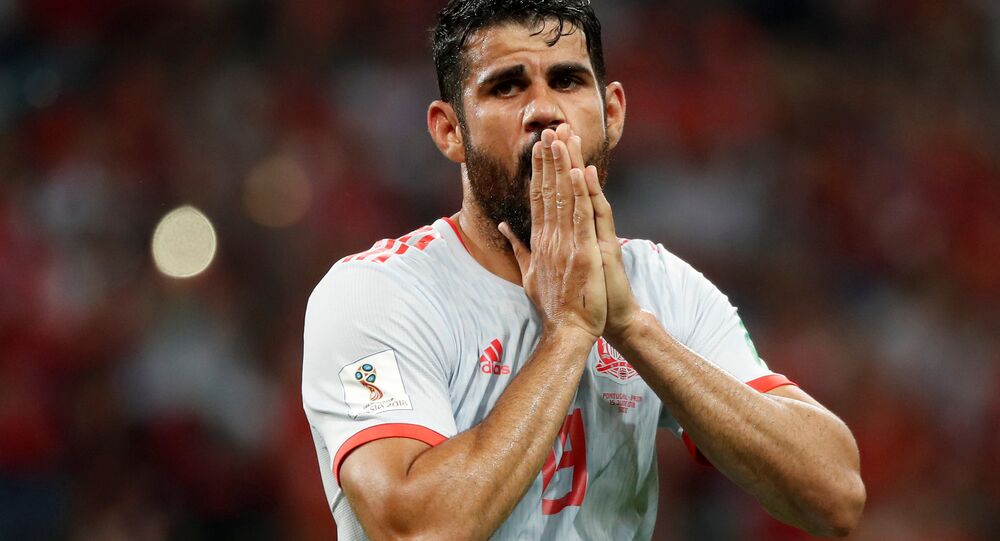 'Wish I was Like Him': Spain's Costa Reveals His Man-Crush on Cristiano Ronaldo

The Russian World Cup 2018 host city of Sochi bore witness to a spectacular clash of Group B titans on Friday, with Portugal’s captain stealing Spain's thunder as his trio ultimately denied his rival victory.

Spain’s Diego Costa has revealed he would love to be like Cristiano Ronaldo following the Real Madrid star’s impressive hat-trick during the Spain-Portugal match on June 15.

After witnessing Ronaldo’s powerful performance from his front-row seat, Costa rushed to express his awe:

"You only have to congratulate Ronaldo," Costa, who scored twice himself during the 3:3 thriller at Sochi’s stadium, was cited by Football Espana as saying.

"Criticize him and look what happens… it’s better to leave him alone, I wish I was like him."

He seems to be not the only one to be left in awe at Ronaldo’s play, with hordes of Twitter users and even Sweden’s Zlatan Ibrahimovic joining in the chorus of praise:

I am still in awe of this Ronaldo free kick; he knew the trajectory, power and angle he needed to score. He was so confident, I thought he was about to take his shorts off! Dude was a terminator. pic.twitter.com/XGc5VVAbHx

Ronaldo always does it on the big stage 👏🏻👏🏻

Some engaged in a bit of irony, however, recalling Ronaldo’s recent "goat" gesture:

I'm still in awe at the fact that Ronaldo carried an entire country on his back for 90 minutes. My GOAT. pic.twitter.com/6Iuz5NOBdf

#WatchingSoccerIsLike Being in Awe of how Amazing Christiano Ronaldo is at everything he does and how amazing he is at Soccer Cause he is so much Fun to watch💕 pic.twitter.com/4yMOJ23Pol

The former Chelsea forward, nevertheless, praised his own game, as well:

"I have to work hard and keep my mouth shut. Goals are very important, but the truth is that I felt good for the whole game," adding that they were good enough to win in this "strange game:"

"We created much more than them [the Portuguese] and had more of the ball. We came back twice but it wasn’t to be," the Spanish forward summed up.

Portugal clawed their way to a 3:3 draw in the match against Spain on Friday at Fisht stadium in Sochi, in Russia’s south. Following his successful penalty score, Portugal World Cup captain Cristiano Ronaldo also conducted an incredible free-kick, thereby earning praise and the title of the match’s best player.

Spain is due to play next against Iran, while Portugal faces Morocco, with both clashes scheduled for June 20, in Kazan and Moscow, respectively.