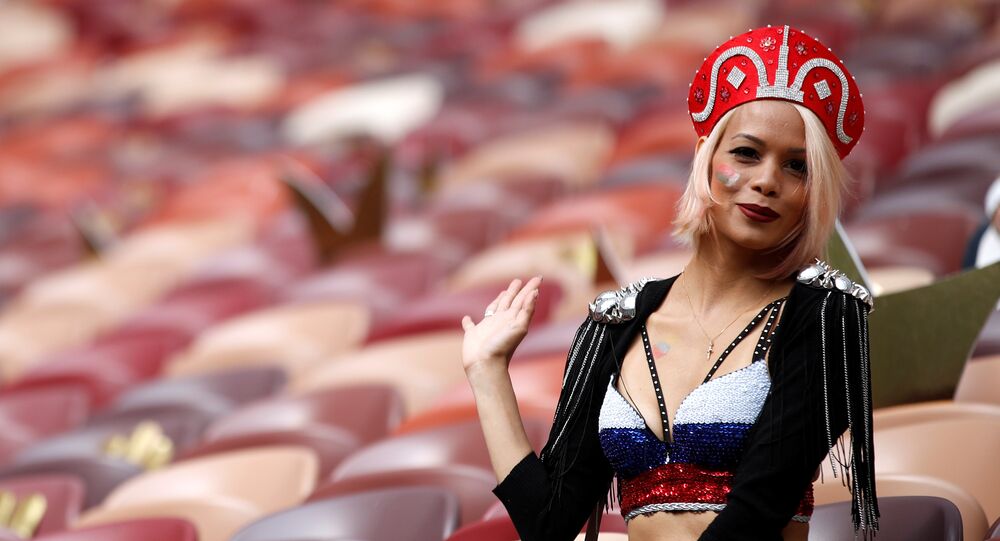 Daily Mail commentator Robert Hardman's attempt to attack Russia by calling the 2018 World Cup a "tawdry circus" and comparing it to the 1936 Berlin Olympics has backfired spectacularly, with the journalist attacked in The Daily Mail's own comments section and on Twitter.

Commenting on Thursday's World Cup kickoff ceremony, Hardman wrote that this "sleaziest global sporting event since the 1936 Berlin Olympics," radiated "all the magic of root canal treatment" and marked "a perversion of justice [from] the very moment FIFA awarded it to Russia back in 2010."

Listing off a series of charges against Russia by Western politicians and media, the commentator accused Moscow of invading neighbors, bearing the blame for the war in Syria, and "state-sponsored terrorism on the streets of Britain." Hardman went on to find fault with the ceremony's technical side, from singer Robbie Williams' unexpected middle finger gesture during his performance, to the event's lighting, to the length of President Putin's opening speech.

Voicing concern over the lack of public criticism over the "the most politically sensitive World Cup of all time," Hardman summed up by urging English footballer Harry Kane not to shake the Russian president's hand in the event that England wins the World Cup.

Hardman's appeal prompted a firestorm of criticism in The Daily Mail's comments section. "Wow, Robert Hardman is such a bitter and twisted individual," user GlobalScot from Cape Town wrote. "Has he ever been to Russia or understood global politics?" he asked.

© Sputnik / Alexei Filippov
Johnson: UK Never Planned to Boycott World Cup as it 'Belongs to Fans, Not Putin'
"Why does everything have to be politicized? It's football for crying out loud, forget about the politics and the SJWs whining and enjoy the greatest football event on earth," illuminated_one from Manchester recommended. "I'm getting tired of the anti-Russia propaganda. It's bordering on hysteria," he added.

"I watched it and thought it was ok. No matter what Russia [does] the anti-Russia brigade here will try and rubbish it; they could have wasted millions on a long over the top opening ceremony as would happen here but instead chose to keep it short and just let the football take center stage, as it should be," g87man from Birmingham chimed in.

"Russia 'stirred up a war in Syria'? How about Russia saved Syria from ISIS, al-Qaeda and the CIA," givenupyearsago from London added.

This is Robbie Williams ' message for you. 👇 pic.twitter.com/LUm8iw1c0k

@hardmanr Jealusy has no cure mate! @robbiewilliams is f-in #British. Thank God someone gave him an opportunity (and loads of money) to perform before we forget who he was. Just sit back, enjoy the games or #STFU!#WorldCup @KremlinRussia_E @DailyMailUKhttps://t.co/4MX1Ni5pwW

Hardman wasn't unique with his crude comparison of the World Cup to the 1936 Nazi Olympics. Others, including Mail on Sunday commentator Dan Hodges and Observer commentator Nick Cohen have done the same in recent days. Their comparisons are not new either, and follow on a similar comparison by Foreign Secretary Boris Johnson back in March. Such claims, whether by British government officials or the media, didn't go unnoticed by critical Twitter users.

1 hour after the end of the very first game in the #Russia2018WorldCup our esteemed columnist has decided this tournament is the 1936 Olympics. He couldn't even wait 'til a few games had passed — because he was going to say this whatever. Literally, he wanted to be 'First'.

Russians lost 20m beating the Nazis, but if you’re @DPJHodges or @NickCohen4 it’s totally fine to compare the #WorldCup with the 1936 Olympics

Imagine the Russian media comparing the London Olympics with the 1936 Games in Nazi Germany because of Britain's invasion of #Iraq and the millions killed there. But that did not happen as the Russian government did not stoop as low as the British government does now. #WorldCup