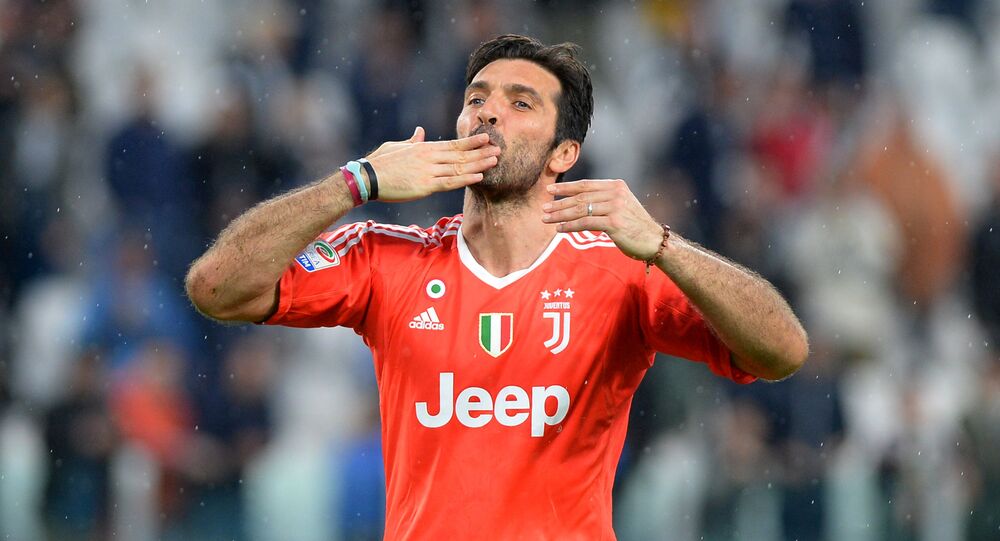 The legendary goalkeeper in an interview with Sputnik spoke about his career as a goalie and revealed who he will be supporting at the upcoming World Cup in Russia.

The role of the goalkeeper undeservedly remains in the shadows; while the position of the forward has always had more weight, goalkeeper from the Turin football club Juventus, Gianluigi Buffon, said.

On Thursday, the legendary goalie, who spent 17 years at Juventus, announced that he would be leaving the team at the end of the season. He will take the field for his last match on Saturday against Verona.

Sputnik: Who will you be supporting at the upcoming World Cup in Russia, given that the world championship will be held without the Italians?

Buffon: It will be a special World Cup for me and for all Italians. For the first time in my career, I will not be a participant, but a spectator. I will not root for any particular team, but I will closely follow all the matches to learn something new and not miss the rise of new football stars.

Sputnik: Don’t you think it is unfair that the goalkeepers in the football Hall of Fame are clearly deprived of attention? For example, we would very much like to see your name next to Lev Yashin in this list.

Buffon: It would be great. Yes, I think the position of the "number one” is undeservedly left in the shadows. Of course, in the eyes of the audience, especially the boys, the scorer looks much cooler.

We cannot close our eyes to the fact that the goal is the central event of a football match; this is around what everything else spins. It is a reward for the game and a pledge of victory.

In this sense, the striker's figure carries more weight than the goalkeeper. Nevertheless, I am proud to be a goalkeeper, and would not agree to be someone else in the team.

Sputnik: Are the Belarusian tanks [the game World of Tanks was created in Belarus] popular in Italy? And did you try to play with one of your teammates?

Buffon: I was pleased to receive an offer from such a famous brand, known not only in Italy, but all over the world. Unfortunately, I do not have time to play with the guys from my team now. Just because at the end of the season we never have time, but if there is a free minute, I can totally play World of Tanks.

In early May, Buffon presented the Italian branch of tanks in the popular computer game created in Belarus.

He was also recognized as the best European football player for the 2002-03 season according to UEFA.

Together with the Italian team, Buffon won the World Cup in 2006, and finished second in the 2012 UEFA European Championship. The keeper holds the title among European players for the number of appearances made for the national team as Buffon has 175 matches (caps) under his belt.

'Huge Problems': Expert Explains What to Expect From Hosting World Cup in Qatar

How Will England Fare in the World Cup? - And a Premier League Review